The Grand Duke rules this small European nation and it is perhaps the only remaining sovereign Grand Duchy in the world. Luxembourg has a very high GDP per capita in the world and it is considered to be a highly developed economy. Lying between the cultural divide between Germanic Europe and Romance Europe, you will find that the customs of Luxembourg are similar to these two traditions. 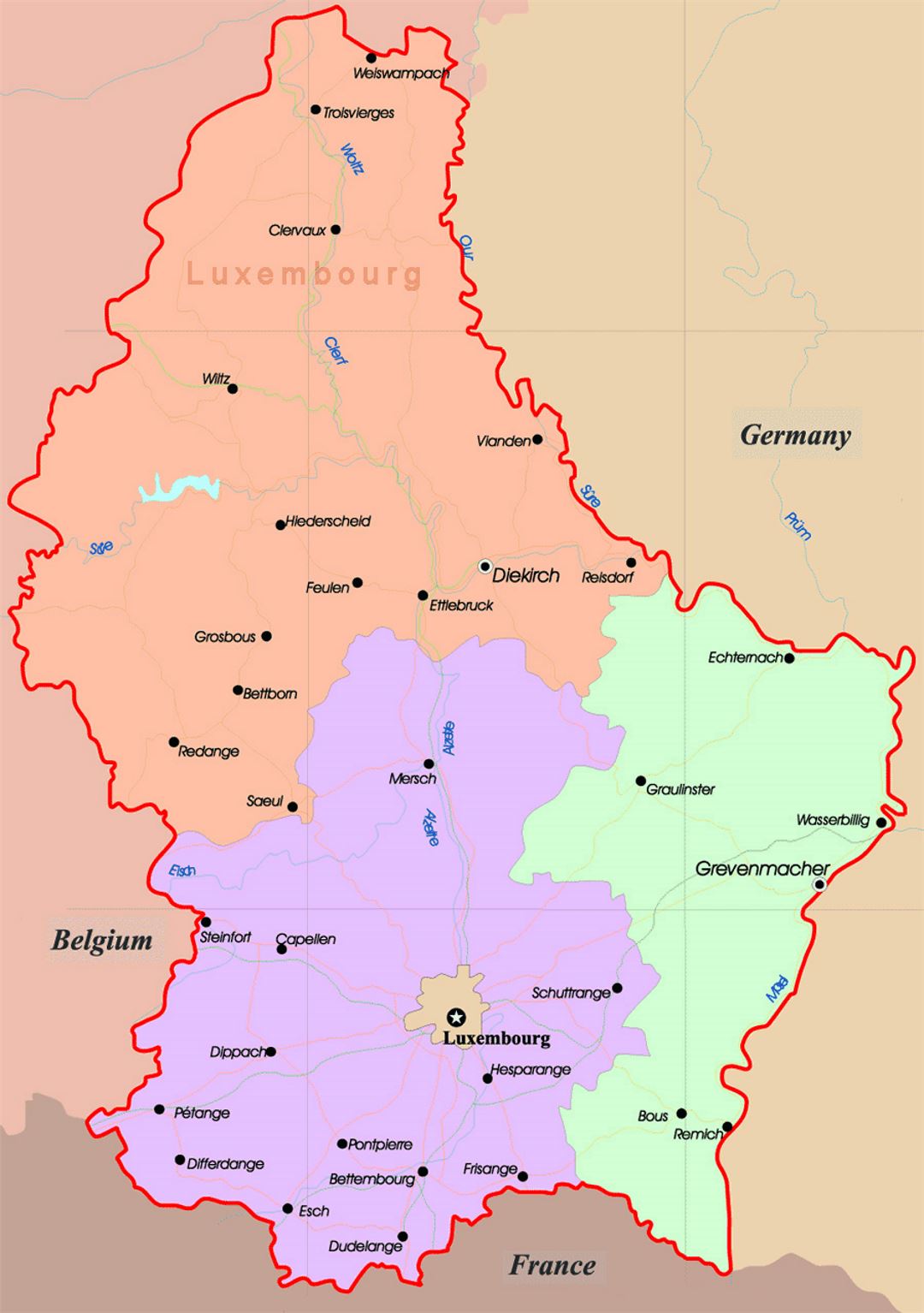 There are three official languages in this nation and it is because of this that Luxembourg is considered to be a trilingual country. The languages spoken are Luxembourgish, French, and German. Most people in the country are Roman Catholic. Luxembourg is one of the smallest countries in Europe but the country has its own unique appeal. There are some great tourist sites to visit in both the Upper as well as the Lower City. The air, rail and road facilities in this country are efficient. Many tourists love the food offered in this country. 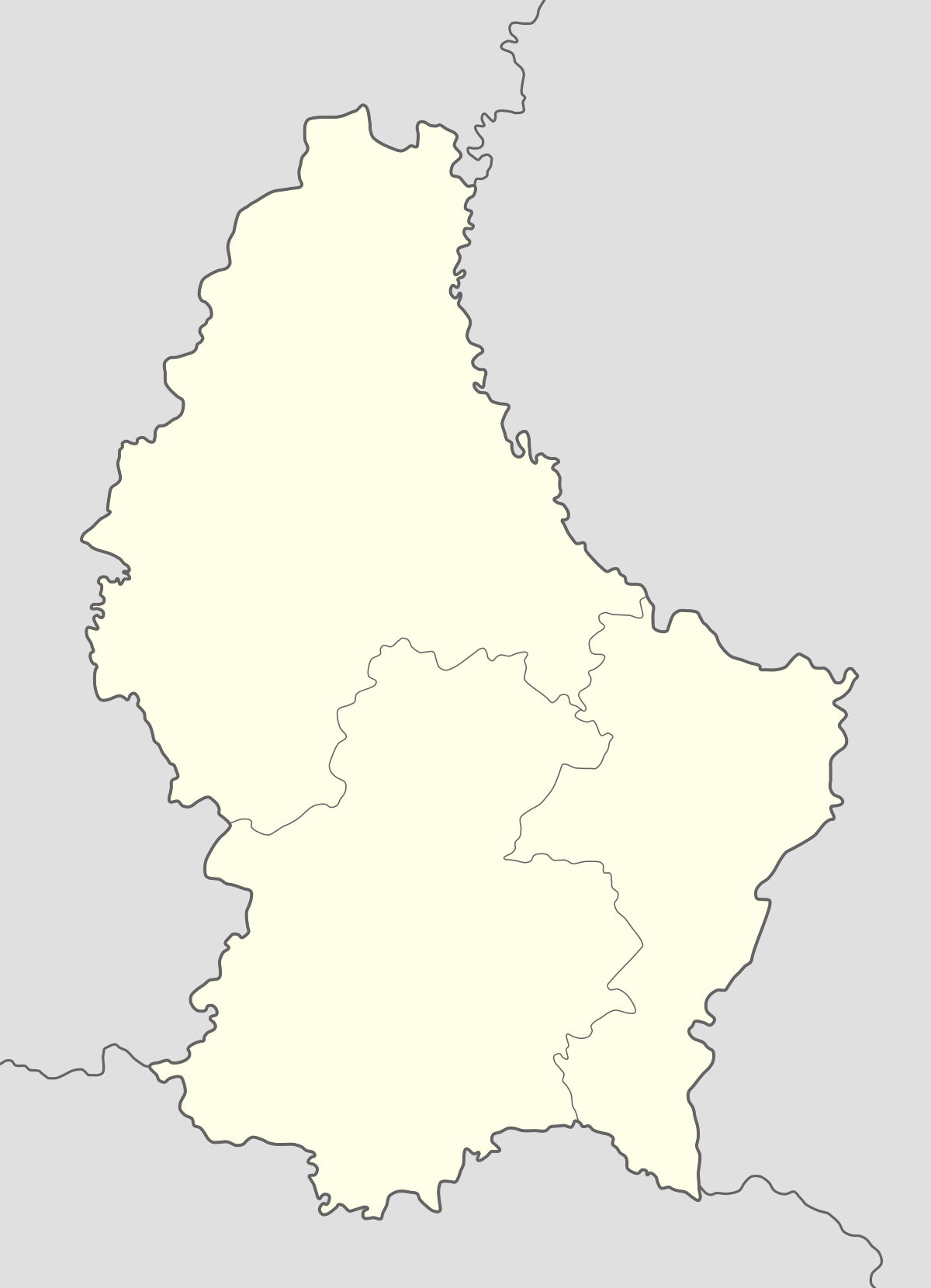 The history of Luxembourg begins the year when it was founded in 963, and since then Luxembourg known by the Roman (Luciilinburhuc), has endured many centuries of cultural and political change. After 400 years of domination by various European nations, Luxembourg was granted the status of Grand Duchy by the Congress of Vienna on June 9, 1815. Although Luxembourg considers 1835 (Treaty of London) to be its year of independence. Luxembourg was not granted political autonomy until 1839 under King William I of the Netherlands, who also was the Grand Duke of Luxembourg. In 1867, Luxembourg was recognized as independent and guaranteed perpetual neutrality. After being occupied by Germany in both World Wars, Luxembourg abandoned neutrality and became a charter member of the North Atlantic Treaty Organization (NATO) in 1949. It is also one of the six original members of the European Union, formed in 1951 as the European Coal and Steel Community (ECSC).

Luxembourg With Cities, Towns, And Streets 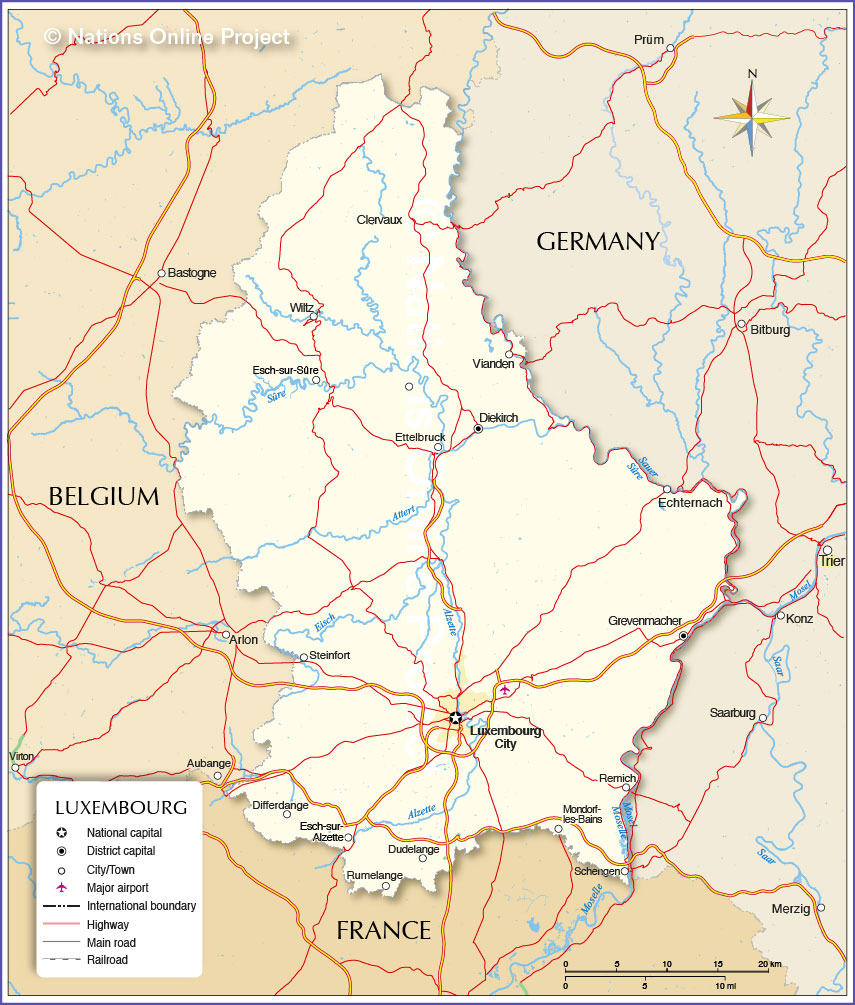 Major towns are Esch-Sur-Alzette (pop.: 28,000), Differdange (19,000), Dudelange (17,600), Ettelbruck (7,400), Diekirch (6,200), Wiltz (4,600), Echternach (4,500), Rumelange (4,500), Grevenmacher (4,000), Remich (3,000), Vianden (1,600), in the southeast corner of the country lies Schengen (4200), a small wine-making village near the tripoint where the borders of Germany, France, and Luxembourg meet. It is the town nearest to where the Schengen Agreement was signed on a river-boat in the Moselle River. The Schengen Agreement is the European treaty that provided for the abandoning of border controls between the participating countries, signed in 1985. The town is also a name giver for the Schengen Area, which comprises the 26 European countries that have abolished passport and any other type of border control. 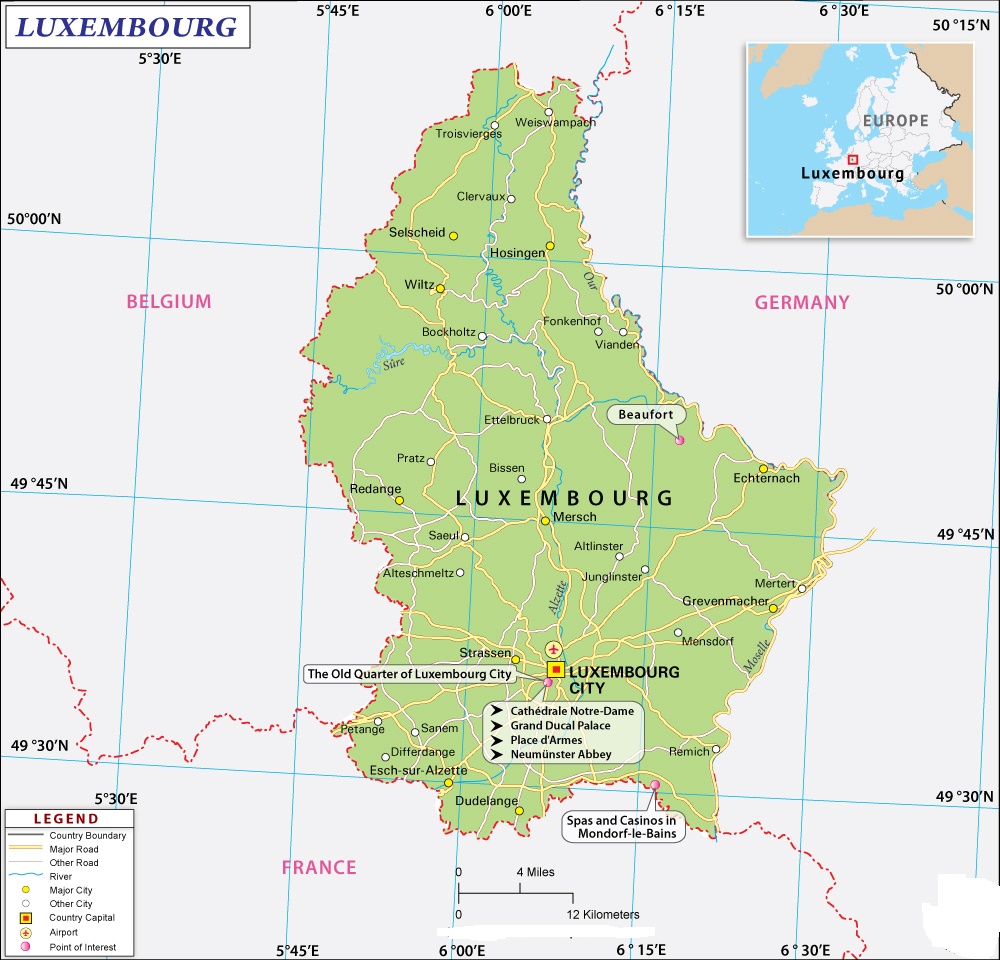 Luxembourg has covered an area of 2,586 sq km (998 sq mi), with a length of 82 km (51 mi) N-S and a width of 57 km (35 mi) E-W. Comparatively, the area occupied by Luxembourg is slightly smaller than the U.S. State of Rhode Island. Luxembourg is a landlocked nation in western Europe. The country's terrain is divided into the northern third, called Oesling, which is situated in the Ardennes range, with forests and hills, and the southern two-thirds, which is known as Gutland. Gutland includes a flat plateau region, the Moselle Valley, Redlands, and what is known as Little Switzerland, which is characterized by forests. The country is primarily lowlands, with its highest point just 560 meters above sea level, with Kneiff in Troisvierges, and the lowest point at the Moselle in Wasserbillig at 133 meters above sea level.

Luxembourg is aptly described as the "Green Heart of Europe" in tourist literature, its pastoral land coexists with a highly industrialized and export-intensive economy. Luxembourg enjoys a degree of economic prosperity almost unique among industrialized democracies. Banking is another major type of business in Luxembourg. It supports the Luxembourg economy to a great extent. The standard of living of the people is very high. As per the report of 2004, the total number of labor engaged in agriculture is 1%; in the industry is 13% and in other service sectors is 86%. 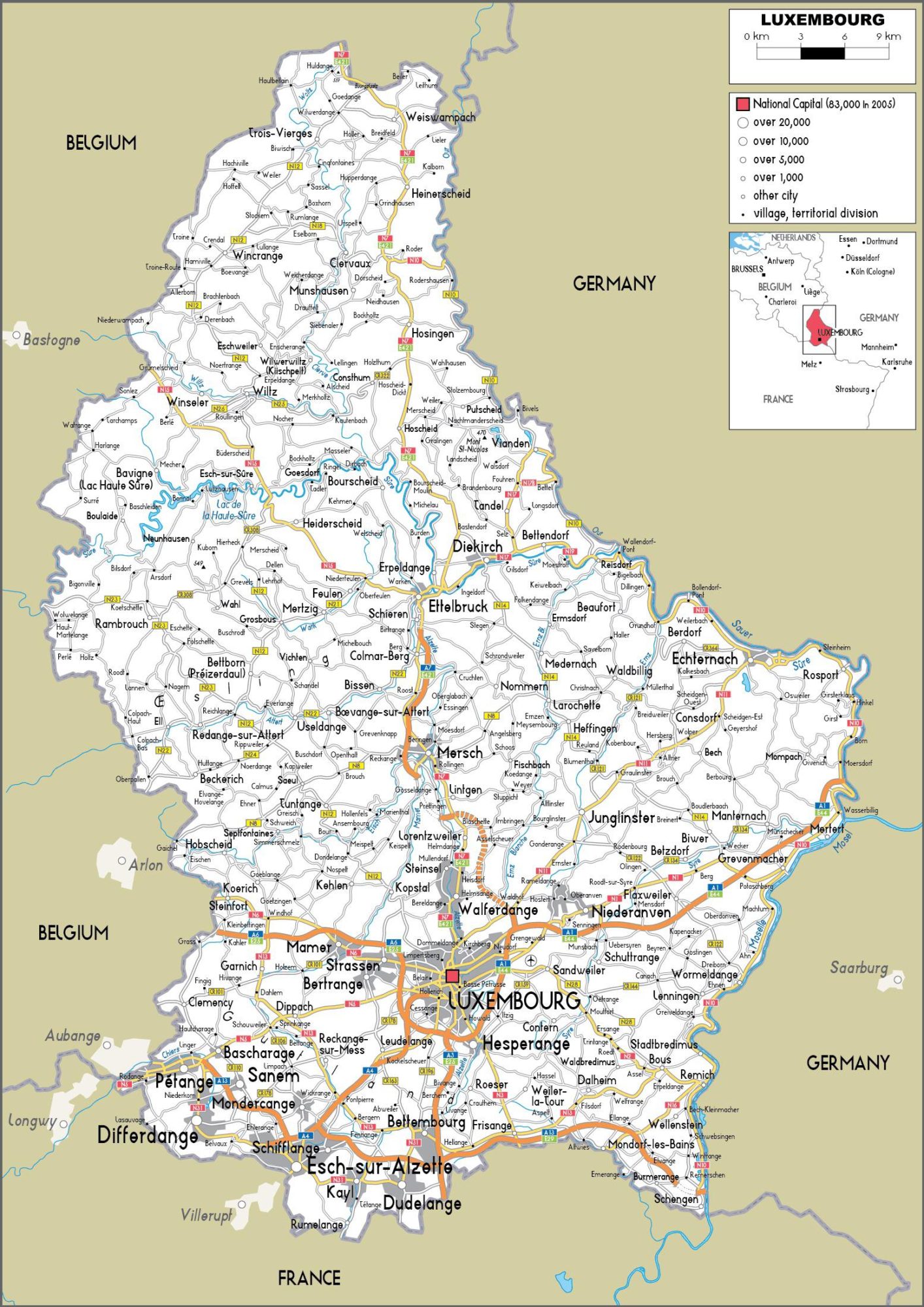 Transportation facilities are excellent in Luxembourg. Railway lines, totaling 274 km (170 mi) in 2002, provide direct links with Belgium via Arlon, with France via Metz and Longwy, and with Germany via Trier. There is a through-train service to Paris and various other points in France. In 2002, 242 km (150 mi) of the railway was electrified. The six Luxembourg motorways cover a total distance of 152 km, linking the capital with Trier (Germany), Thionville (France), and Arlon (Belgium) as well as with Esch-Sur-Alzette and Ettelbruck in Luxembourg. The remaining road network in Luxembourg accounts for a total length of 2,820 km, consisting of 798 km of trunk roads and 2,022 km of secondary roads. 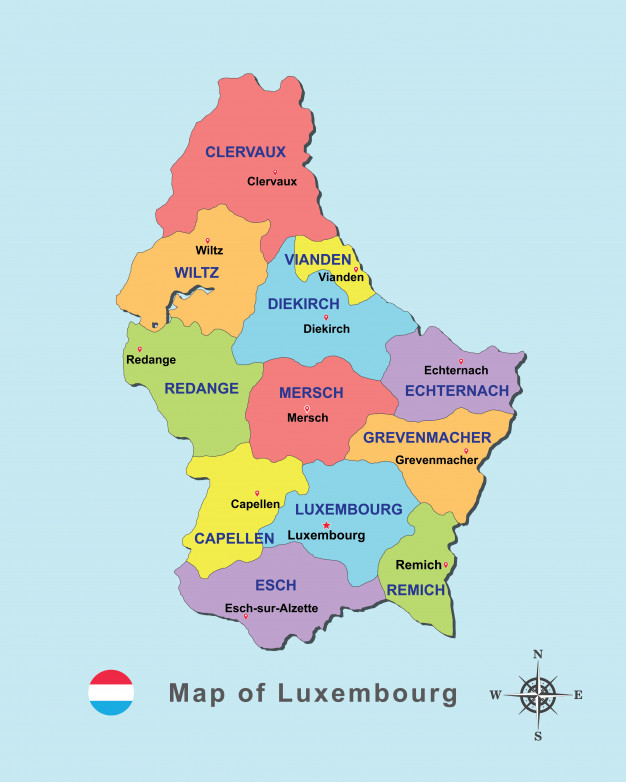 Luxembourg culture and society encompasses the people and their religion, language, festivals of the place, and many more things. The people of Luxembourg are known as Luxembourger. About 87% of the population of Luxembourg is Roman Catholic; the rest 13% are Protestant, Jewish, and Muslim. Luxembourgish is the language that is used in day to day conversation.