Map of Oklahoma | Political, County, Geography, Transportation, And Cities Map is the Map of Oklahoma. You can also free download Map images HD Wallpapers for use desktop and laptop. Click Printable Large Map

Oklahoma is one of the 50 federal US states located in the South Central region of the country. Map of Oklahoma share border with Arkansas, Colorado, Kansas, Missouri, New Mexico, and Texas. The state is the 20th-most largest state with covering an area of 181,195 km² (69,898 sq mi). It has a population of 3.9 million people making it the 28th most populous state of the United States. Oklahoma City is the state capital and largest city of the state.

Evidence shows that the state of Oklahoma exists as early as the ice age. Many explorers traveled through the state in 1541, but French explorers claimed the area in the 1700s. French rule the area until 1803 when all the French territory was acquired by the United States in the Louisiana Purchase. The region became home to the “Five Civilized Tribes. On November 16, 1907, Oklahoma joined the Union as the 46th state of the country.

Oklahoma is a landlocked state located in the South Central region of the country. It covers an area of 181,195 km² (69,898 sq mi). Political Map of Oklahoma shares border with Texas on the south and west, Colorado in the northwest, Kansas in the north, Missouri in the northeast, Arkansas in the east. It also shares a border with New Mexico at the western end of its panhandle. Oklahoma City is the state capital of Oklahoma. The largest city and metro is Oklahoma City.

The County Map of Oklahoma features 77 counties. It ranks in 17th position in terms of the number of counties. There were seven counties (Logan, Cleveland, Oklahoma, Canadian, Kingfisher, Payne, and Beaver) when Oklahoma was first organized as the Oklahoma Territory. Osage County is the largest county by area with 2,304 sq mi (5,970 km2). Oklahoma County is the most populous county in Oklahoma.

Oklahoma is one of the 50 federal states located between the Great Plains and the Ozark Mountains near the geographical center of the 48 contiguous states. Geography Map of Oklahoma shares border with Texas on the south and west, Colorado in the northwest, Kansas in the north, Missouri in the northeast, Arkansas in the east. Black Mesa is the highest point of Oklahoma with a height of 1516 m (4,973 ft ).

The State has almost every type of major geographical region of the South Central United States. High Plains, the Gypsum Hills, the Red Bed Plains, the Wichita Mountains, the Sandstone Hills, the ancient Arbuckle Mountains, The Prairie Plains, The fertile Red River Plains the major geographical region. Oklahoma’s major rivers are the Arkansas River with its tributaries, the Canadian, and the Cimarron Rivers.

Transportation Map of Oklahoma Oklahoma is generated by a system of Interstate Highways, inter-city rail lines, airports, inland ports, and mass transit networks. I-5, I-82, I-84, I-105, I-205, I-305, I-405, I-505 are the major interstate highways of the state. The largest airports in the state are Oklahoma City’s Will Rogers World Airport and Tulsa International Airport. Oklahoma is connected to the nation’s rail network via Amtrak’s Heartland Flyer.

Other Cities and Places Shown on the Map 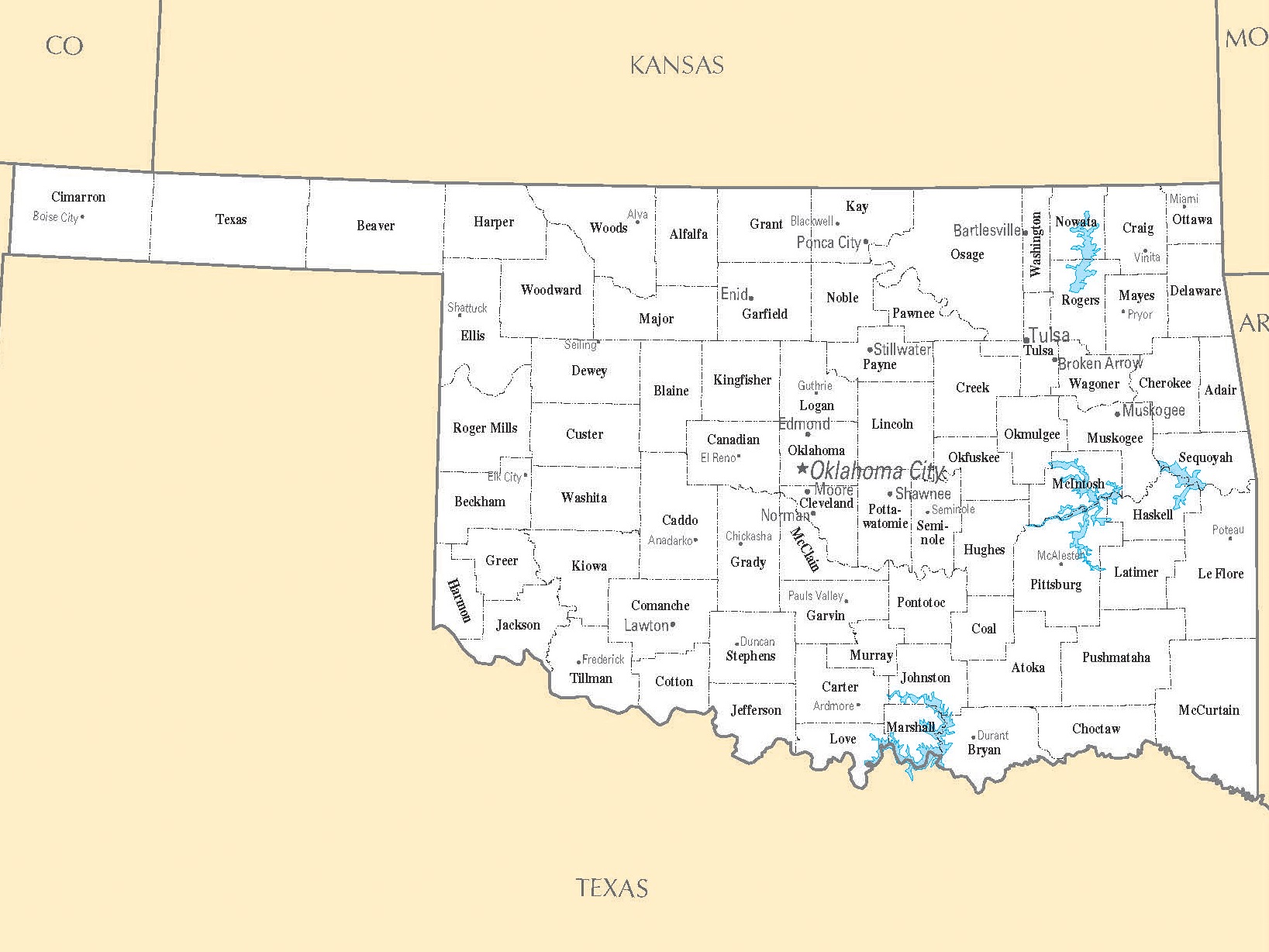