Map of Vermont | Political, County, Geography, Transportation, And Cities Map is the Map of Vermont. You can also free download Map images HD Wallpapers for use desktop and laptop. Click Printable Large Map

The US state of Vermont is a northeastern state located in the New England region of the United States. Map of Vermont is the 45th largest state of the country with covering an area of 9,616 square miles. Vermont comprised a population of 624,594 people making it the second least populated state in the US (after Wyoming).

It shares borders with Massachusetts, New Hampshire, New York, and Canada. The state also shares its international border with Quebec, a province in Canada. Montpelier is the state capital of Vermont and the most populous city is Burlington (pop. 42,556).

Native American tribes inhabited the land today known as Vermont for many years. During the 17th century, the French claimed the territory as part of the Kingdom of France’s colony of New France. France ceded the territory to Great Britain in 1763. On 18 January 1777, Vermont declared itself an independent republic. It was the first state in North America to abolish slavery. Vermont joined the Union as its 14th state On 18 February 1791.

Vermont is a northeastern us state located in the New England region of the country. Political Map of Vermont shares border with Massachusetts to the south, New Hampshire to the east, and New York to the west. The state also shares its international border with the Canadian province of Quebec to the north. Montpelier is the state capital of Vermont.

There are fourteen counties in the County Map of Vermont. These counties together contain 255 political units, or places, including 237 towns, 9 cities, 5 unincorporated areas, and 4 gores. Windsor County is the largest county with a total area of 977 square miles (2,530 km2). Chittenden County is the most populous county with a population of 156,545.

The US state of Vermont is a northeastern state located in the New England region of the United States. It is the 45th largest state of the country with covering an area of 9,616 square miles. It shares borders with Massachusetts, New Hampshire, New York, and Canada. The highest point in Vermont is Mount Mansfield at 1,339.7 m (4,395.3 ft).

The major feature of Vermont’s landscape is the Green Mountains. It is the 310 km (190 mi) long mountain range that runs along the western edge of the state in a north/south direction. they are part of the Appalachians. The Taconic Mountains are also part of the Appalachian Mountains. Vermont features many small rivers like The Connecticut River, The Winooski River. The major lake in the state is Lake Champlain. It is a large freshwater lake in North America with a surface area of 1,270 km² (490 sq mi).

Transportation Map of Vermont features 2,843 miles (4,575 km) of highways under its control. Three Interstate highways and five U.S. highways enter Vermont. I-89, I-91, I-93 I-189, I-289 are the Interstate highways of Vermont. The state is served by Amtrak’s Vermonter and Ethan Allen Express, the New England Central Railroad, and the Green Mountain Railroad. Busiest and the only international airport in the state are Burlington International Airport. 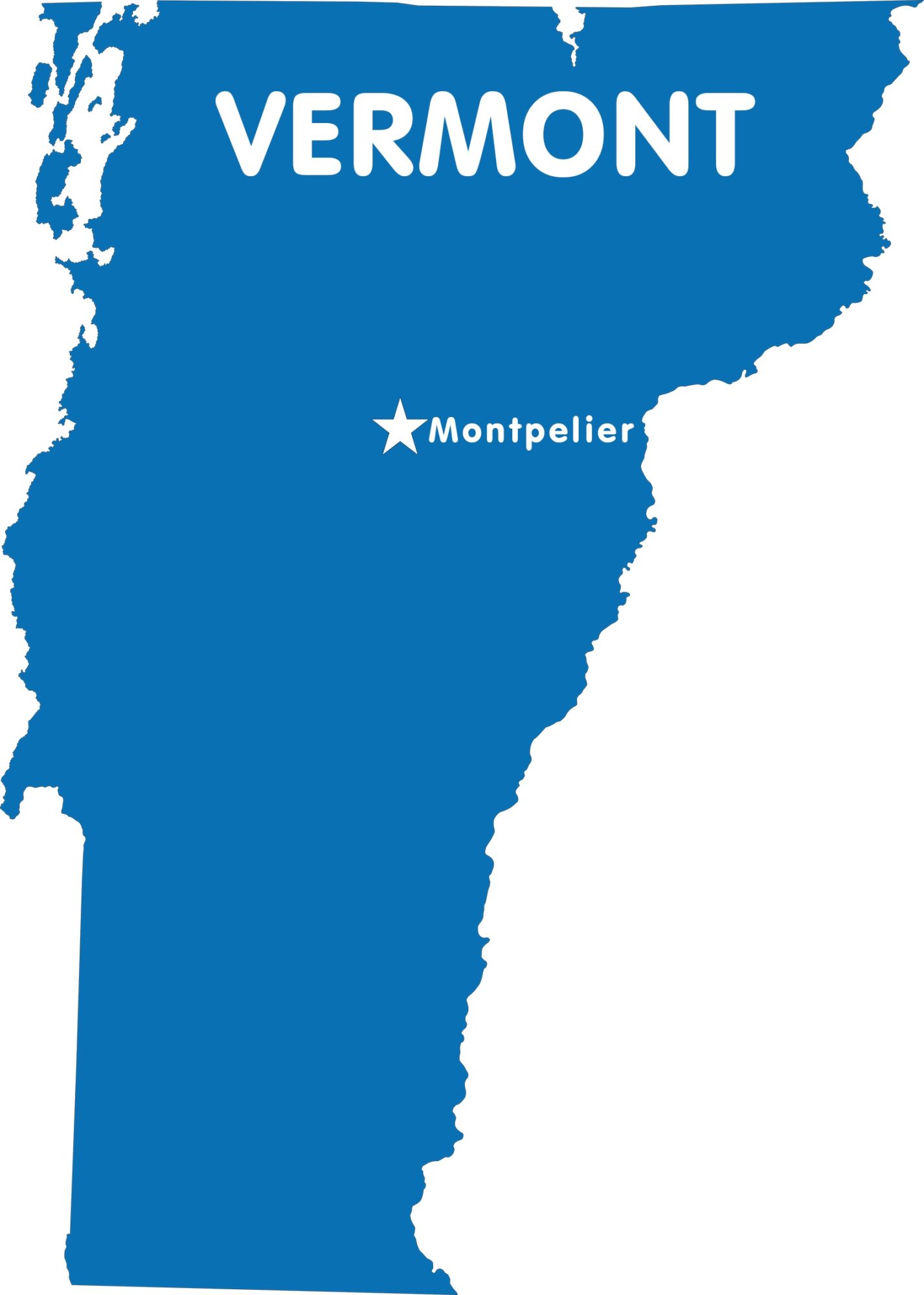 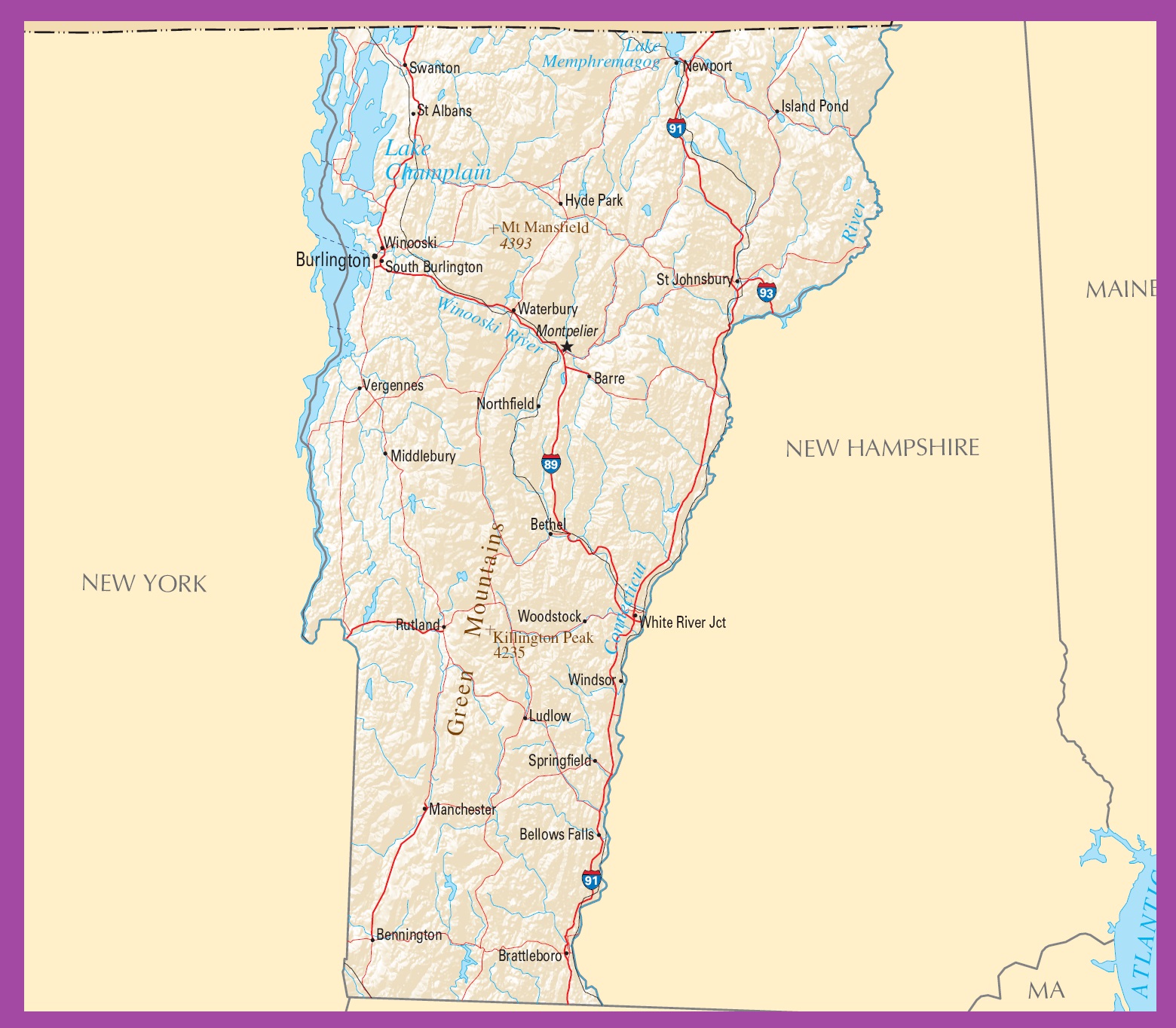