North America is the third-largest by area and the fourth most populated continent in the world. It is a continent that comprises the northern half of the American landmass and it is connected to the South American landmass by the Isthmus of Panama and is separated from Asia by the Bering Strait. According to the Map of North America, It is located in the northern hemisphere between the Pacific Ocean and the Atlantic Ocean.

North America is the third largest continent. It extends for more than 5,000 miles (8,000 km) to within 500 miles (800 km) of both the North Pole and the Equator and has an east-west extent of 5,000 miles. It covers an area of 9,355,000 square miles (24,230,000 square km). The name America is derived from that of the Italian merchant and navigator Amerigo Vespucci, one of the earliest European explorers to visit the New World.

The sovereign States in North America: 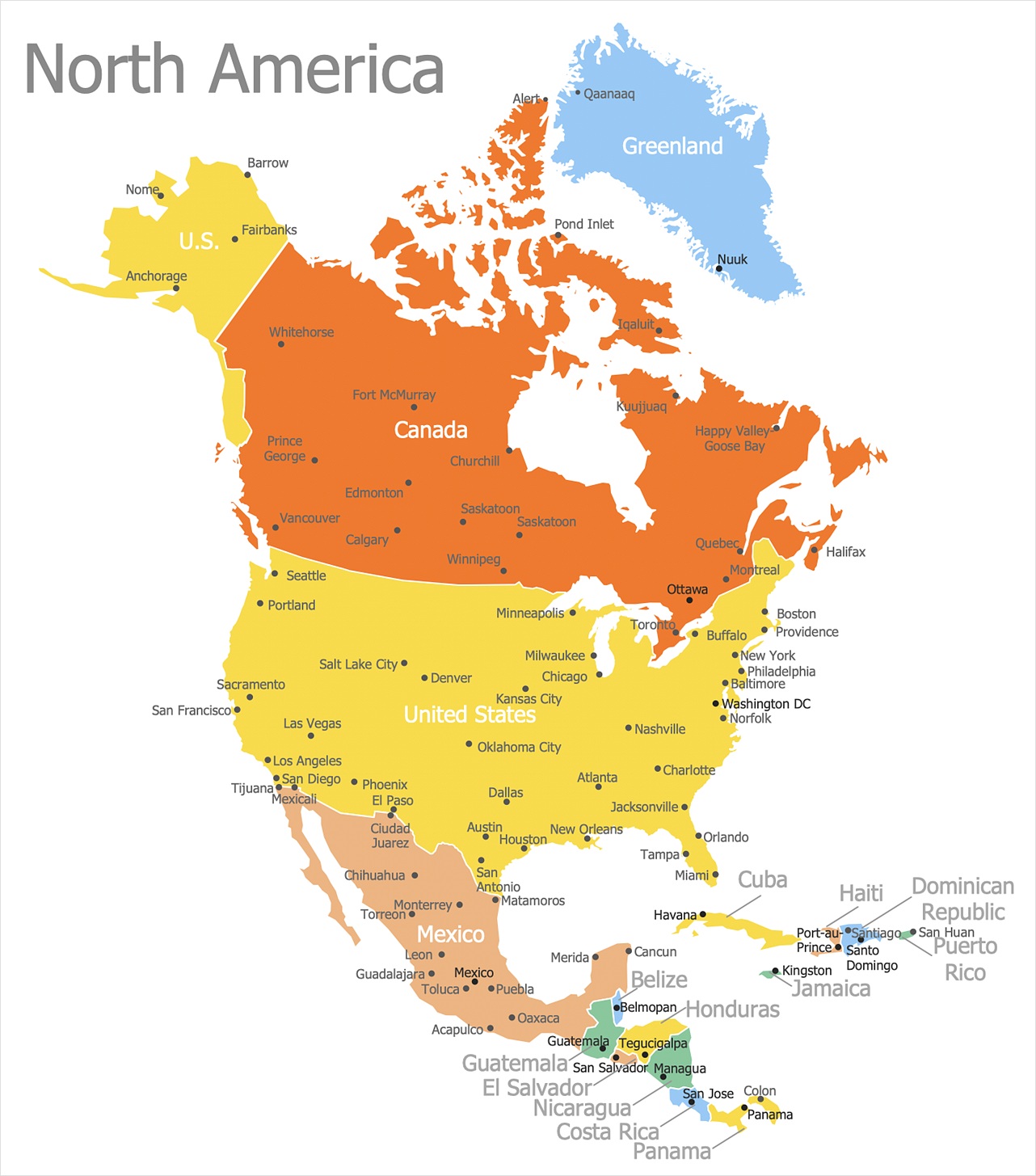 Anthropologists believe that early inhabitants arrived in North America between 25,000 to 11,000 years ago by traversing the Bering Strait. Some experts believed that They possibly migrated through the Bering Land Bridge, using primitive boats. There is scientific evidence connecting indigenous Americans to Asian peoples, specifically from the eastern Siberian populations. Indigenous peoples of the Americas have been linked to North Asian populations by linguistic dialects and blood types.

North America is geographically divided into four great regions: the Rocky Mountains, the Great Plains stretching from the Gulf of Mexico to the Canadian Arctic, the Great Basin and Alaska in the west, and the plateau of the Canadian Shield in the northeast. 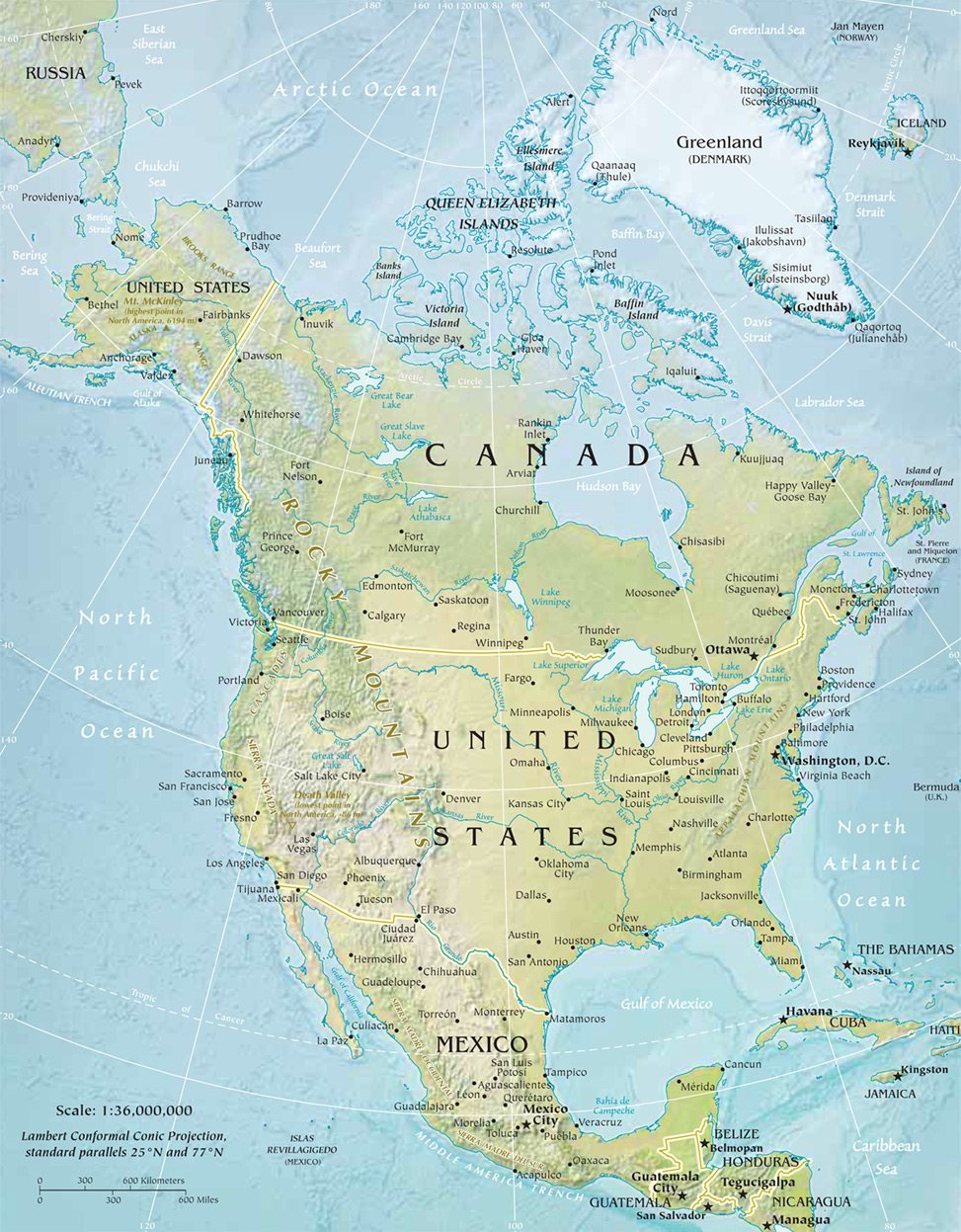 The Great Plains of North America slope east from the Rockies and extend to the edge of the Canadian Shield and the western edges of the Appalachians. The Mississippi River System is the major river of North America and the United States at (2,339 miles) (3,765 km) in length. It flows from northwestern Minnesota south to the Gulf of Mexico, just below the city of New Orleans. 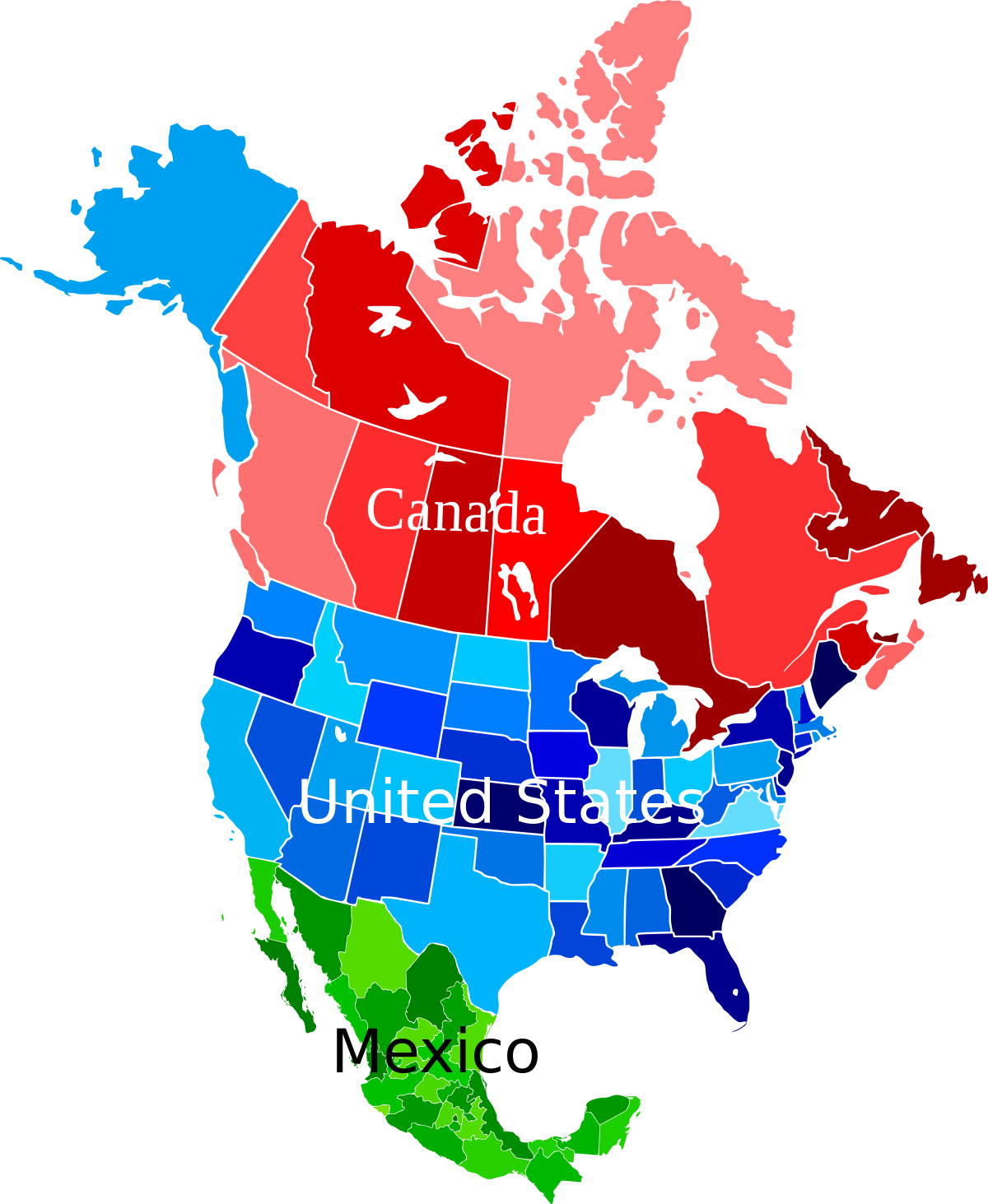 North America the continent has been here for tens of millions of years. North America, the economic powerhouse, has reigned supreme for nearly a century, becoming the largest and strongest in the world, and industrial dynamo, a commodities cornucopia, and a magnet for millions upon millions of immigrants seeking a better life. The U.S.A. has the largest economy in North America. The country's estimated gross domestic product (PPP), as per 2018 estimates is $ 20,513,000 million. Mexico stands second with its GDP (PPP) at $ 2,575,206 million. Canada's GDP (PPP) is $1,852,514 million. 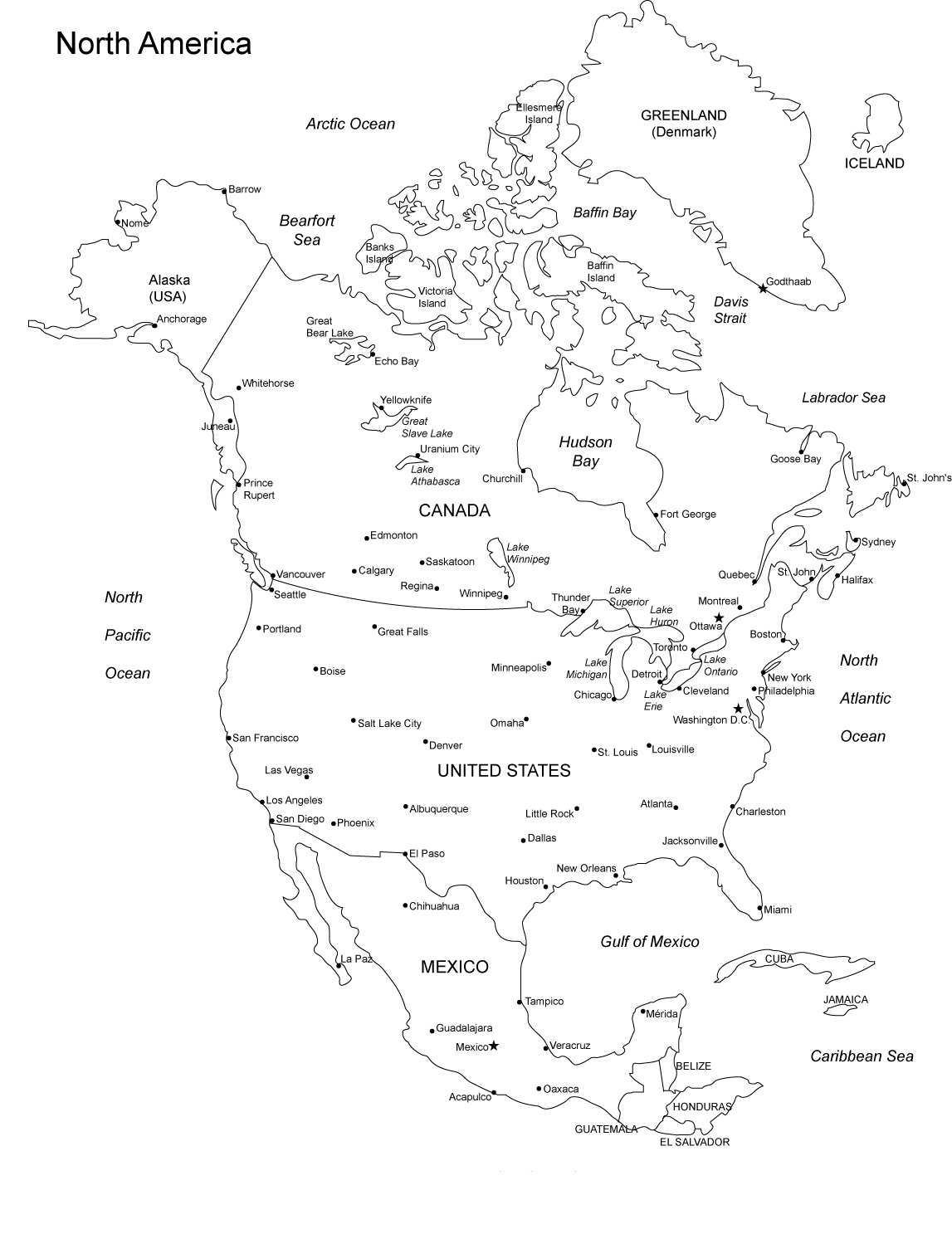 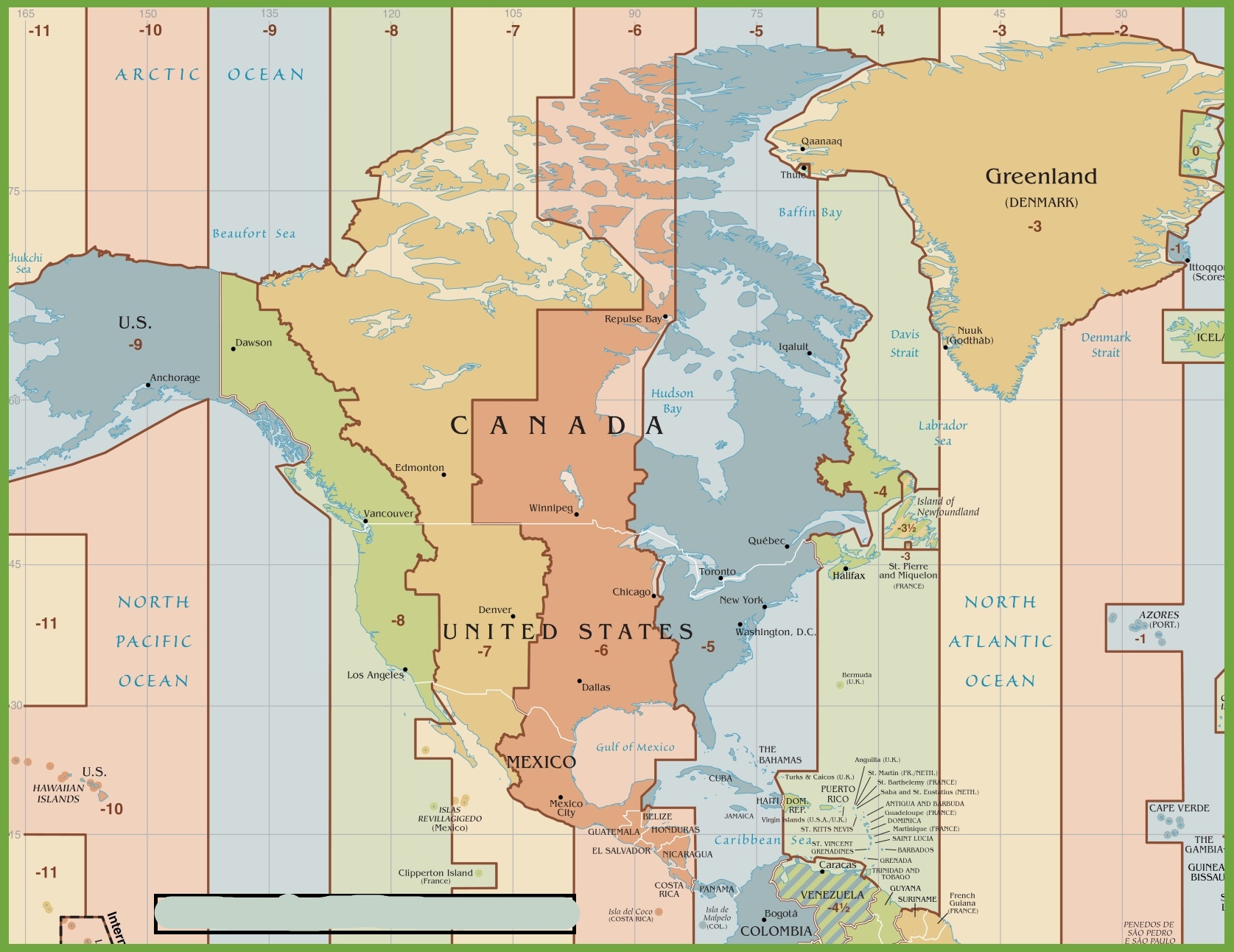