Oceania is a continent that is made up of thousands of islands throughout the Central and South Pacific oceans. It includes Australia, the smallest continent in terms of total land area.

Most of Australia and Oceania are under the Pacific, a vast body of water that is larger than all the Earth’s continental landmasses and islands combined.  The name “Oceania” justly establishes the Pacific Ocean as the defining characteristic of the continent.

Twelve different time zones are observed in this region ranging from UTC/GMT – 9:00 to UTC/GMT GMT + 14. Several countries and island nations use time zones that are offset from UTC/GMT by partial hours. 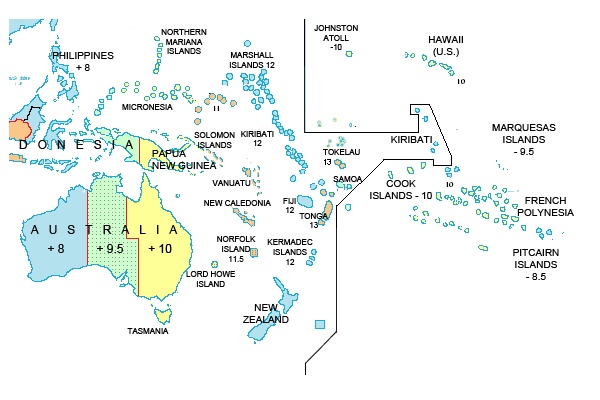 Standard Time isin effect across most of the Oceania region. During certain times Australia, New Zealand, Fiji, and Samoa switch to Daylight Saving Time. Countries observing Daylight Saving Time will be marked with a (DST). Note: Micronesia is spread across two time zones, both +10 and +11 ahead of UTC.

UTC and GMT an update

Some sources still refer to it as UTC/GMT and some web browsers, e.g. Mozilla Firefox, still display it as GMT.