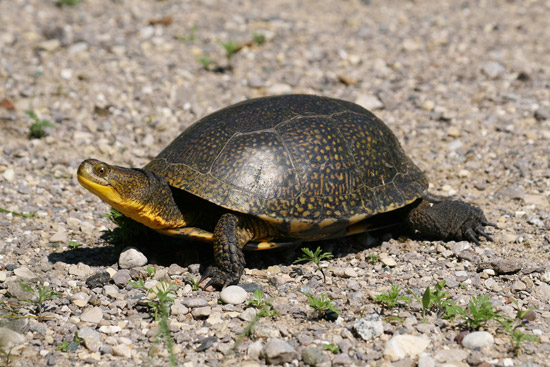 Painted Turtle Is The Official State Reptile of Vermont. Vermont Adopted the painted turtle as an official state reptile by a joint resolution in 1994 due to efforts made by students of Cornwall Elementary School. Vermont State Reptile Painted Turtle is one of the smallest turtles in the world, is native to the eastern United States. Painted Turtle is a particularly shy reptile, unlikely to be seen in the wild both because of its shyness and also because it is becoming increasingly rare.

The Vermont State Reptile Painted Turtle is small with a dark brown shell that has pronounced ridges when a turtle is young. These gradually wear smooth as the reptile ages. A younger turtle also has a flatter shell, which grows domed as the turtle matures. Its undershell is dark but may have a few lighter markings. The Head, legs, and feet of Painted Turtle are also dark brown, almost the same shade as the shell. This most distinguishing feature of Painted Turtle is an irregular, yellow-orange spot on each side of its head, just behind the eye. The State Reptile of Vermont Painted Turtle legs also sometimes have yellow, orange, or red mottling. A female usually has a smaller head, thinner tail, shorter front claws, and a higher, broader shell when compared to a male. A female’s undershell is flat, while a male’s curves inward.

Chalky wetlands with both dry and wet areas such as marshes, spring seeps, wet meadows, and bogs, often near wooded areas.

The bog turtle forages during the day. Males Turtle are likely to have a larger range and may dig themselves several burrows. Females Turtleare is more likely to stay near a single burrow and use the same hole for a few years.