Kentucky is US states located in the east south-central region along the west side of the Appalachian Mountains. It is officially known as the Commonwealth of Kentucky. Map of Kentucky is the 37th most extensive state with an area of 40,409 square miles. It is the 26th most populous state in the United States with 4.46 million people (2019 est.) Frankfort is the official state capital of Kentucky while Louisville is its largest city.

In the mid-1700s, the French, Spanish, and English began exploring this land of green hills, mountains, valleys, and mighty rivers. The region of what is today Kentucky was ceded by the French to the British in 1763 and then to the US in 1783 by the Treaty of Paris (which ended the American Revolution). Kentucky became the 15th state to join the Union on June 1, 1792.

Kentucky is located in the east south-central region of the United States. Political Map of Kentucky covers an area of 40,409 square miles. Kentucky shares borders with Illinois, Indiana, and Ohio to the north, Virginia to the southeast, and Tennessee to the south. The Big Sandy and the Tug Fork Rivers define the state line with West Virginia in the east. The Mississippi River creates the border to Missouri in the southwest. The state is called ‘Bluegrass State’. This nickname is based on Kentucky bluegrass found in many of its pastures.

County Map of Kentucky is divided into 120 counties.  It is one of the highest numbers of counties of any state in the USA. The largest county is Pike County at 787.6 square miles (2,040 km2), and the most populous county is Jefferson County with 741,096 residents as of 2010. Each county in Kentucky is governed at the county seat, which serves as the capital of the county.

Kentucky is located in the east south-central region along the west side of the Appalachian Mountains. It is the 37th most extensive state with an area of 40,409 square miles. Kentucky borders  West Virginia, Virginia, Tennessee, Missouri, Illinois, Indiana, and Ohio. The state’s highest elevation point is on Black Mountain and has a height of 1,263 meters.

Other cities and towns in Kentucky: 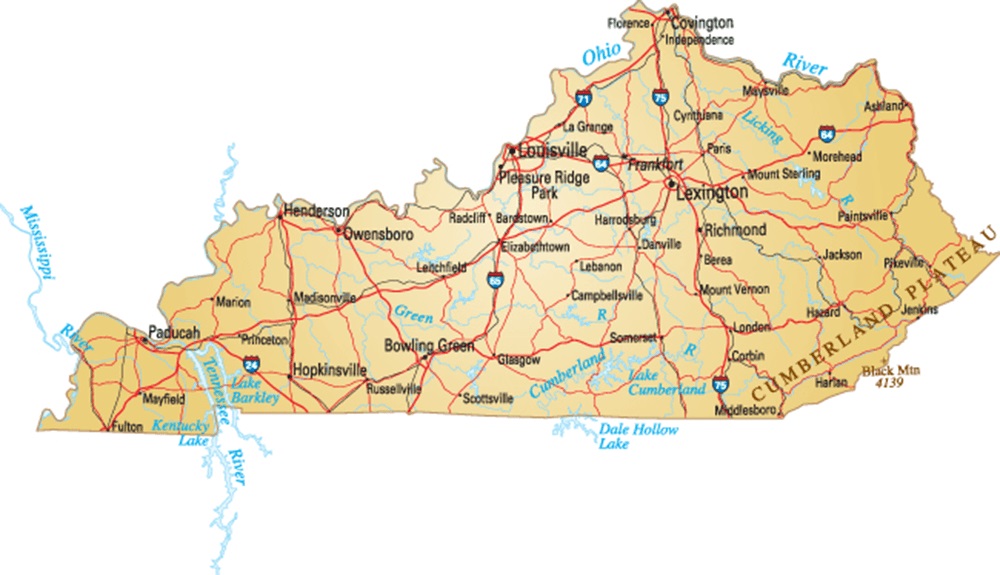