What is the Kentucky State Bird? 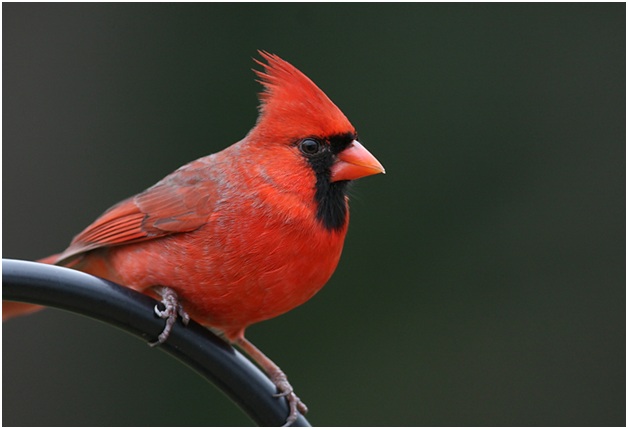 Northern Cardinal was titled as the official state bird of Kentucky in 1926. The northern cardinals are mid-sized songbirds with brilliant eye-catching crimson red color all over their bodies. The prominent raised chest and coral colored beaks are possessed by both male and female northern cardinal. They can be found almost anywhere with dense bush for nesting.

The Kentucky state bird Northern cardinals are abundant in woodlands, swamp, City Park and even in the backyard. Since they don’t migrate very often, their bright colorfulness can still be seen in the snowy days. The most preferred food of the birds are sunflower seeds. The male northern cardinals are called territorial songbirds for they make clear and loud whistles from the top of trees or other high locations in order to defend their territory. During nesting, mated pairs of these breathtaking black faced birds sing together. They mate for life and stay together all the year round.

The male Northern Cardinals are a perfect blend of acquaintance, conspicuousness, and elegance. People can’t take their eyes off the beautiful red bird. The brown colored female birds also look quite amazing. Cardinals don’t roam and they don’t molt into a dismal feathers. That’s why they still look magnificent in the snowy backyards in winter time. In summer, people can hear their sweet whistles in the morning. Total 7 states have the cardinal as their state bird: Indiana, Illinois, Kentucky, North Carolina, Ohio, Virginia, and West Virginia.

Very few female songbirds of North America sing, but the female Northern Cardinal birds are heard singing often while sitting on the nest. Maybe it is to give the male bird the information about bringing food for her and the babies to the nest. A mated Cardinal pair shares calls, but the female bird can sing a longer. It is often to some extent more complex song than the male Cardinal. Many people are confounded each spring by the mesmerizing sight of a cardinal attacking its reflection in a reflected surface like window, car mirror, or shiny bumper.

It is done by both males and females. It is most often done in spring and early summer when they are preoccupied with protecting their territory against any intruders. Cardinals may spend hours battling these intruders without giving up. The levels of hostile hormones diminish a few weeks later and these attacks end. It is heard that one female Cardinal kept up this aggressive behavior every day for six months without ending. The male cardinal brutally shields its breeding territory from other male birds. When a male finds its mirror image in glass surfaces, it habitually will spend hours fighting the fantasy intruder.

It is very favorite among people and it is the state bird of seven states. Its average lifespan is 13-15 years. The oldest Northern Cardinal on record was a female, and was 15 years, 9 months old when she was found in Pennsylvania. Cardinals are not found in forests. They prefer to live on the edges of forests and grassland landscapes with groves and undergrowth so that they can hide and make nests. Kentucky state bird Cardinals typically feed on the ground or in low bushes. They eat a wide diversity of insects, grains, wild fruits, and seeds. They lay eggs between the middle of April and the middle of August.

The law designating the cardinal as the official Kentucky state bird is from Section 2.080 (State bird) of the Kentucky Revised Statutes, Title 1 (SOVEREIGNTY AND JURISDICTION OF THE COMMONWEALTH) Chapter 2 (CITIZENSHIP, EMBLEMS, HOLIDAYS, AND TIME) Section 2.080. Northern Cardinals are considered highly valuable to humans because they eat a diversity of insects in gardens, and because they like to eat the seeds of weeds very much.