What Is The National Flower of Argentina? 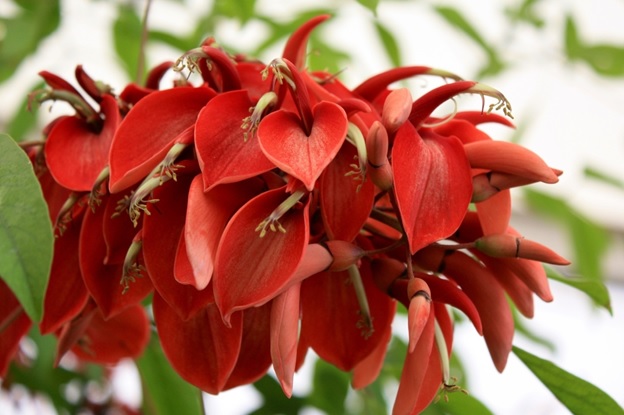 Erythrina Cristina Galli is the national flower of Argentina. It is commonly known as Ceibo in Spanish. On the date: December 2, 1942, the ceibo was declared the Argentina national flower. This flower has played and still playing an important role in Argentine cultural heritage and it is the most popular flower native to the north of the country, where it is found in places ranging from Salta in the northwest to Santa Fe and Buenos Aires in the east.

Erythrina Cristina Galli (Ceibo) is the National flower of Argentina. The Erythrina is a South American tree, with carmine red flowers and a crooked trunk. Erythrina flower was declared the National Flower of the Republic of Argentina on December 2, 1942.

Erythrina flowers bloom on the Erythrina crista-galli tree, which is a flowering treeof the family Fabaceae. In English, it is known as the Cockspur coral tree. Erythrina is a native of Argentina, Uruguay, Brazil, and Paraguay. Erythrina grows to a height of 10-20 meters.

The flowers of the ceibo tree are celebrated annually on November 22 with the National Day of the Flower. Its unique shape, the affection that the natives have towards this flower (for the natives the red color is the symbol of love, affection, attraction and beauty) and last but not the least its abundance in Argentina made the Erythrina Cristina Galli the national flower of Argentina.

The national flower of Argentina, Erythrina Cristina Galli flowers bloom on the Erythrina crista-galli tree, which is a flowering tree of the family Fabaceae. The name erythrina means coral tree from the Greek word for red in allusion to the carmine red color that these flowers have. Erythrina crista-galli is a small tree, the girth of its trunk measuring 50 cm (20 in). Normally it grows 5–8 m (16–26 ft) tall, although some individuals, such as in the Argentine provinces of Salta, Jujuyand Tucumán, can grow up to 10 m (33 ft).

Erythrina flowers bloom between November and February. Two of the four petals of the flower, which are called wings, are so small that they are overshadowed by the calyx. The other two petals partially bind together on occasion and form the flower’s keel or carina, and thus help to protect the reproductive organs. The Argentina national flower grows in tropical and subtropical regions of the Americas, including in neighboring Uruguay, Brazil and Paraguay. It is found along watercourses, swamps and other areas with fertile, well-drained soil and its small size and ornamental value have made it a popular tree to be planted in urban areas such as parks and other green spaces.

The cockspur coral tree has played an important role in Argentine poetry, legends and folklore. One of the most famous is the story of Anahí, a young indigenous woman who was captured by the Spanish conquistadores and killed her captor when she was trying to escape. Regardless of fleeing into the forest, she was found out and punished for her act by being tied to a tree and burned alive.

When the men returned for her body, they discovered a cockspur coral tree in its place. The legend claims that the gleaming leaves and velvety red flowers of this tree had replaced her body and now stood as a symbol of bravery and strength in the face of suffering. This is just folklore though. There are about 100 species of Erythrina. The tiger’s claw spines of the coral tree can holdup clothing and skin. The wood of the Erythrina is very light and porous; and it is used for the construction of rafts, model aircrafts and beehives. Erythrina flowers are commonly pollinated by insects and hummingbirds. Erythrina species are used as food plants by the larvae of some Lepidoptera.

It can be used to cure constipation as well because it has the property to work as the laxative. To sum up, the national floral symbol of Argentina, Erythrina Christina Galli is a fiery red flower that brightens the dull nature in an instant. Because of its prevalence in the locality and the linkage to the heritage of Argentine culture, it has been designated as the national flower of Argentina.