What is the State Flower of Colorado? 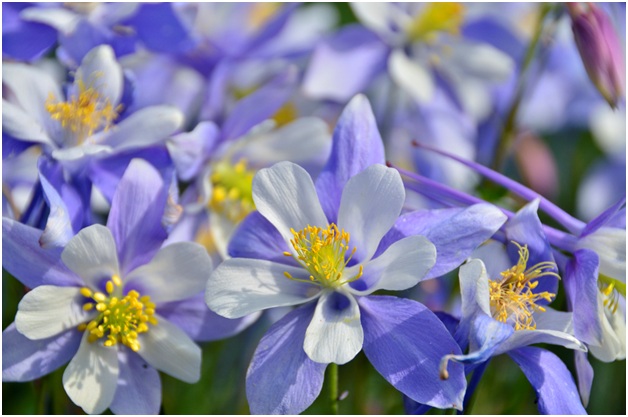 Rocky Mountain Columbine is the State flower of Colorado. Aquilegia caerules is the scientific name of this flower and it is commonly known as Rocky Mountain Columbine or the Colorado blue columbine. The flowers belong to the family of Ranunculaceae. It is a flower indigenous to the state of Colorado. The columbine flower can be found no lower than 10,800 feet and as high as 13,000 feet, which means it’s a true mountain bloom The white and lavender Columbine, Aquilegia caerules, was declared as the official state flower on April 4, 1899, by an act of the General Assembly.

In 1925, the General Assembly made it the obligation of all citizens to protect this rare species from unnecessary destruction or waste. To further protect this delicate flower, the law prohibits digging or uprooting the flower on public lands and limits the gathering of buds, blossoms and stems to 25 in a day. The state flower of Colorado, Columbine flower, is the most honored state flower in all of the United States.

The official state flower of Colorado, the Colorado blue columbine, comes from the Latin word Aquila (which is the root of the plant’s genus Aquilegia) which means “eagle” and it refers to the claw-like spurs at the base of the flower. The common name “Columbine” comes from the Latin word for “dove”, due to the resemblance of the inverted flower to five doves clustered together. The Colorado blue columbine is an herbaceous perennial plant often found at elevations of 2,100 to 3,700 m (6,900 to 12,100 ft). This beautiful plant can grow to 20–60 cm (8-24 in) tall, with flowers sprouting in inflorescences.

The flowers have several varieties of color, ranging from pale blue to white, pale yellow and pinkish. The flowers are commonly bi-colored, with the sepals a different shade to the petals. They consist of five petals, five sepals and an ovary surrounded by 50 to 130 stamens. Columbines flourish in full sun or partial shade with rich, consistently moist, well-drained soils.

If grown in full sun, Columbine Flowers generally bloom more extensively and are more compact in growth than those grown in shade. There are 70 species of columbines in the world and about one-third of them are native to North America.

Columbine plants are popular for their distinctively unique Columbine flowers. The unique Columbine flower shape makes the plant well suited for attracting long-tongued nectar feeders, (especially hawkmoths and hummingbirds) and at the same time preventing small bees from reaching the nectar directly. Because of the hummingbird’s slender bill and long tongue, the little bird is able to reach the Columbine flower nectar from the base of the spur, ultimately acting as the Columbine Flower’s most efficient pollinator. Columbine flowers have a rich history in the herbal market. Native Americans were said to have used infusions from different parts of the plant for a variety of diseases ranging from heart problems to fever, and even to help relieve the pain of poison ivy. Another honor was bestowed on the Rocky Mountain columbine in 1915 when the song “Where The Columbines Grow” was adopted as the official Colorado state song.

The Rocky Mountain Columbine is truly a flower that represents the individuality of the state Colorado. Native to the state, these stunningly gorgeous flowers uphold the beauty of the state and thus, they are the perfect ones to be adopted as the state floral symbol of Colorado.