What Is the State Tree of Louisiana? 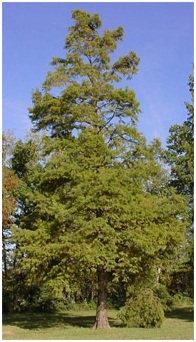 Bald Cypress is the State Tree of Louisiana. Taxodium distichum is the scientific name of Bald Cypress and it is commonly known as ‘cypress” tree, also known as baldcypress, bald-cypress, cypress, southern-cypress, white-cypress, tidewater red-cypress, Gulf-cypress, red-cypress, or swamp cypress. Taxodium is the genus of the Bald Cypress and T. distichum is its species. The Louisiana’s State tree Bald Cypress is belongs from the family of Cupressaceae. The Bald Cypress is native to many swampy and wetland areas in Louisiana and lowlands of the Southeastern and Gulf Coastal Plains of the United States. Also found in the expanded range from southeastern New Jersey south to Florida and west to East Texas and southeastern Oklahoma and also inland up the Mississippi and Ohio Rivers north to southern Illinois. The oldest found reside in North Carolina, but older ones may exist elsewhere.

The Louisiana’s State tree Bald Cypress is also commonly planted in Europe, Asia, and other temperate and subtropical locales. Mature planted specimens are seen as far north as Pittsburgh, and Ottawa, Ontario, where annual rainfall ranges from about 760 mm to 1630. While it grows best in temperate climates, the normal northern limit of the species is not due to a lack of cold tolerance, but to precise reproductive requirements.

When a state bodies select a symbol for the state it should be represent extra ordinary design, quality, availability, expression, and usefulness, cultural, traditional and religious back ground, which go back thousands of years or its popularities On basis of the facts that stated above, the state General Assembly of Louisiana designated the Bald Cypress as the official state tree of Louisiana on May 26, 1963.

The species of The State tree of Louisiana, Bald Cypress is a popular ornamental tree that is cultivated for its light, feathery foliage and tawny brown to dull red autumnal color. In cultivation it thrives on a wide range of soils, including well drained sites where it would not grow naturally because young seedlings cannot compete with other vegetation. It prefers hot summers for good growth. It growth is healthy but very slow if it has been planted in locales with the cool summers of oceanic climates.
The State tree of Louisiana Bald Cypress is the wood of this species is valued for many uses, primarily to do with its durability (rot resistance).

Traditionally it has been used for the construction of Buddhist temples and religious wood carving. Accessible stands are rare and in these straight trees have often been removed long ago. This species has been introduced in various countries in Asia, Europe and America either as an amenity tree in temple grounds and monasteries or later as a plantation forestry tree. It is also used in horticulture, especially in southern Europe, where it is well established in larger gardens and parks. A limited number of cultivars are known of this species. The essential oil extracted from root-wood of Cypress is used in medicine to cure inflammatory wounds, an antiseptic and to make cosmetics.
Not only does the State tree of Louisiana provide a beautiful landscape, it also represents bravery and simplicity. Its ability to thrive in tougher conditions and its abundance in the locality makes the tree the State tree of Louisiana.