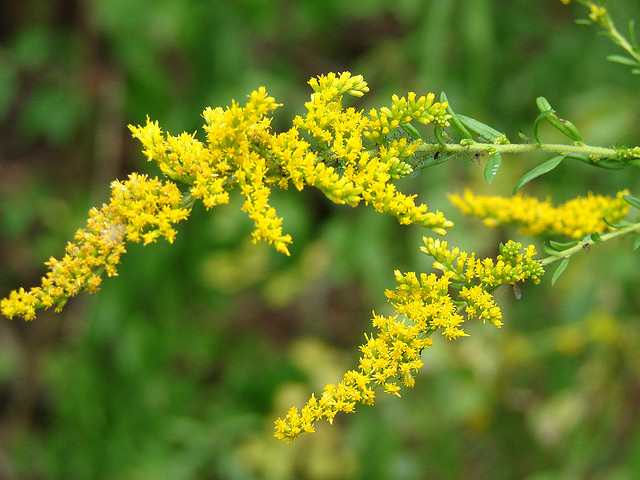 Goldenrod Is The Official State Flower Of Nebraska. Goldenrod was Adopted as the official Nebraska State Flower in 1895. The goldenrod is a plant species belonging to the sunflower family (Asteraceae), and its other common names include the giant goldenrod and tall goldenrod. The flower is native to North America and thrives in many non-Arctic parts of the continent. National Flower Of Nebraska Goldenrods grows in numerous US states including Texas and Florida, Mexico‘s Nuevo Leon, and the Canadian provinces of Nova Scotia and Alberta.

In Nebraska, the flower thrives in pastures and meadows, waste areas, roadsides, ditches and on the edge of the woodlands. The State Flower Of Nebraska goldenrod is an herb that can grow to a maximum height of about 80 inches and can spread as underground rhizomes. The plant has several leaves on its stems and every stem produces numerous small flower heads at the top. The heads are yellow with both the ray floret and disc floret. The plant has between 10 to 17 tiny ray florets, while its bract is blunt, green, and firm. These flowers are often grouped in either flattish or elongated clusters on the top edge of the goldenrod’s branches.

The Nebraska State Flower gets its name from its upper stem or inflorescence, where small bright flowers grow. Its rays attract bees and butterflies, which feed on its nectar while pollinating the plant. The flower blossoms from July until October. State Flower Of Nebraska Goldenrod is pollinated by a wide variety of insects such as the soldier beetle. Flowers leave grayish fluff behind. This catches the wind and spreads the seeds. Goldenrod also spreads through rhizomes or underground stems.

Leaves: Narrow, pointed, about 3 in (7.6 cm) long with a finely serrated edge