What is the State Animal of Nebraska? 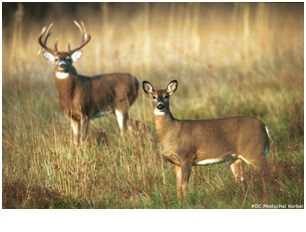 White-tailed deer is the state Animal of Nebraska, which scientifically known as Odocoileus virginianus. It is native to the United States, Canada, Mexico, Central America, and South America as far south as Peru and Bolivia. It has also been introduced to New Zealand, Cuba, Jamaica, Hispaniola, Puerto Rico, Bahamas, Lesser Antilles, and some countries in Europe.

The Nebraska’s state animal White-tailed Deer has belonged separate name for both male and female. The male deer called bucks and females are does or Doze. The color of white-tailed deer is grayish brown in winter, which turns to tan or reddish brown in summer. Although some parts of the body are white like as belly, throat, under the tail, insides of the legs, inside the ears, around the nose and eyes. The male white-tailed deer has antlers. 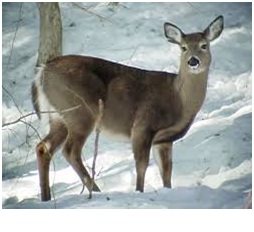 The Nebraska’s state animal White-tailed deer being eat a wide variety of plant food. Tender shoots, leaves, and twigs of shrubs and trees are looking through them. Many of the common agricultural and garden crops are also eaten by them. White-tailed deer became the state Animal of Nebraska in 1981.