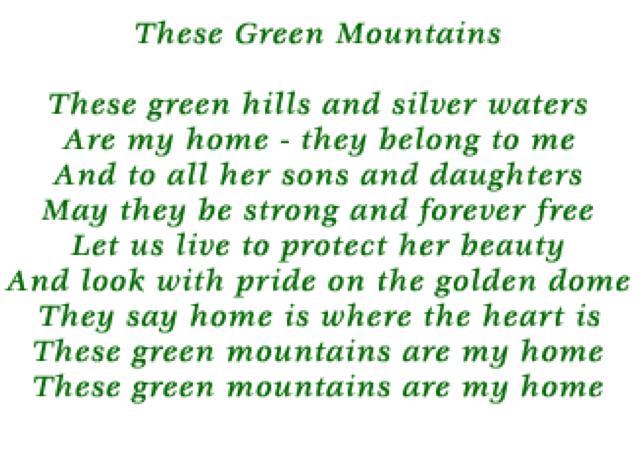 “These Green Mountains” Is The Official State Song Of Vermont. Vermont adopted These Green Mountains as the official state song (composed by Diane Martin and arranged by Rita Buglass Gluckstate) In 2000, Replacing the original Vermont State Song: “Hail to Vermont!” by Josephine Hovey Perry (adopted in 1938).

These green hills and silver waters

are my home. They belong to me.

And to all of her sons and daughters

May they be strong and forever free.

Let us live to protect her beauty

And look with pride on the golden dome.

They say home is where the heart is

These green mountains are my home.

These green mountains are my home.

“Hail, Vermont!” served as the State Song Of Vermont for 62 years. Composer Josephine Hovey Perry of Barre wrote the song describing a Vermonter’s pride in the beauty and history of the state. “Hail, Vermont!” was selected by a committee in 1937 and made official on May 12, 1938. The Vermont Arts Council commissioned a competition for the selection of the Vermont State Song in 1998, and on May 22, 2000, “These Green Mountains” was chosen as the state song from among more than 100 songs submitted.