Map of Wisconsin | Political, County, Geography, Transportation, And Cities Map is the Map of Wisconsin. You can also free download Map images HD Wallpapers for use desktop and laptop. Click Printable Large Map

Wisconsin is one of the East North Central states located in the Midwest, and Great Lakes regions of the country. With a total area of 169,634 km² (65,496 sq mi), Wisconsin is the 23rd largest state by total area. Wisconsin has a population of about 5.8 million people (2019 est.) making it the 20th most populous states. The state capital is Madison. The largest city of the state is Milwaukee, which is located on the western shore of Lake Michigan.

The area was inhabited by a variety of Indian tribes, including the Kickapoo, Sioux, and Winnebago before the European explorers arrived. France held that land for decades for many years. In the Treaty of Paris of 1763, it was awarded to the British as a result of their victory in the French and Indian War (1754-1763). The state has joined the Union on 29th May 1848, as the 30th state, with generally the same boundary as the present state.

Wisconsin is located in the Midwest and Great Lakes regions of the United States. It is the 23rd largest state by total area. 17% of the state is water areas, and 46% is covered by forest. It shares borders with Lake Superior and Michigan to the north, Minnesota to the west, Iowa to the southwest, Illinois to the south, and Lake Michigan to the east. The state capital is Madison while the largest city of the state is Milwaukee.

The County Map of Wisconsin is divided into 72 counties. Some of the major counties of the state are Adams County, Barron County, and Door County. The biggest county is Marathon County with a total area of 1,576 square miles (4,080 km2). Pepin County is the smallest county of the state. Milwaukee County is the most populous county of Wisconsin. It has a population of 947,735 people.

Wisconsin is one of the East North Central states located in the Midwest, and Great Lakes regions of the country. With a total area of 169,634 km² (65,496 sq mi), Wisconsin is the 23rd largest state by total area. It shares borders with Michigan, Minnesota, Iowa, Illinois. Timms Hill in Price County is the highest point in Wisconsin, at an elevation of 595 m (1,951 ft).

The Geography Map of Wisconsin has five major geographic regions.

Some major river of the state is the Chippewa, Fox, Menominee, Mississippi, St. Croix, Wisconsin and Wolf. The major lakes are Lake Michigan, Lake Superior, and Lake Winnebago. There is one national forest managed by the U.S. Forest Service in Wisconsin, Chequamegon-Nicolet National Forest.

The Transportation Map of Wisconsin is controlled by the Wisconsin Department of Transportation. It is responsible for planning, building, and maintaining the state’s highways. I-39, I-41, I-43, I-90, I-94, I-535, I-794, I-894 are the main interstate highways of the state. The largest airports in the state are General Mitchell International Airport and Madisons Dane County Regional Airport. Amtrak provides daily passenger rail service between other states and cities.

The state capital is Madison. The largest city of the state is Milwaukee, which is located on the western shore of Lake Michigan. 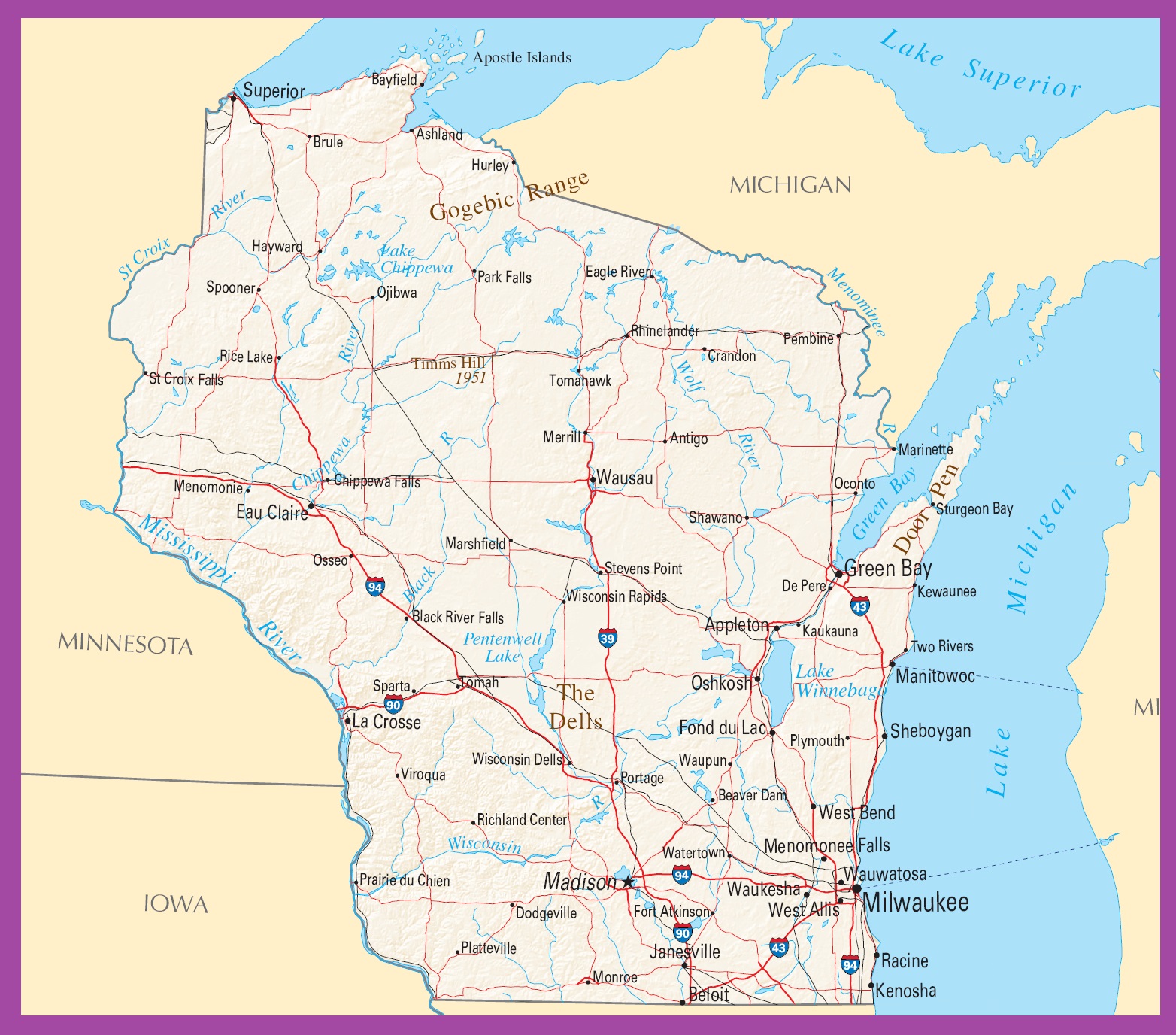 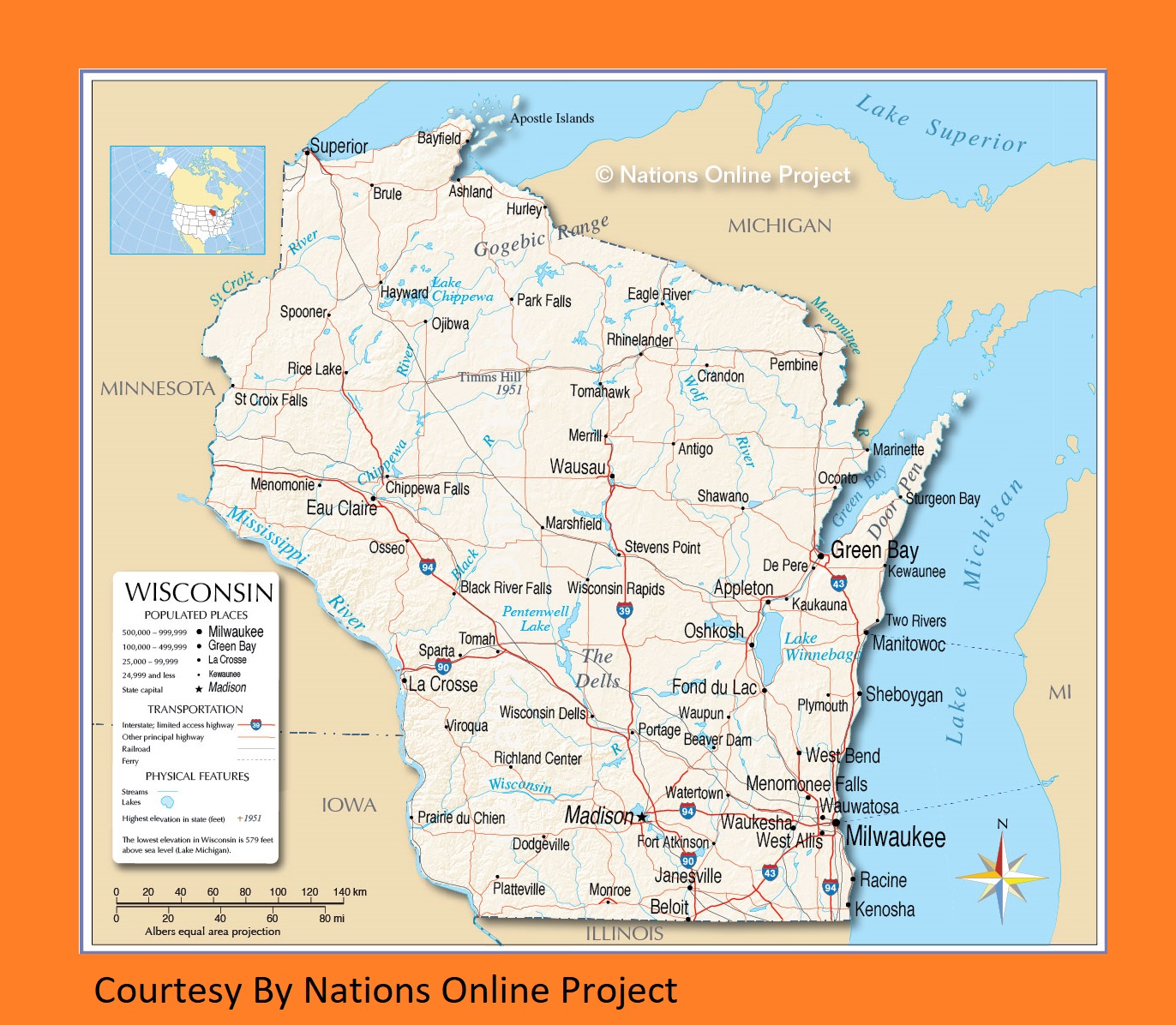