What Is The State Tree of Oklahoma? 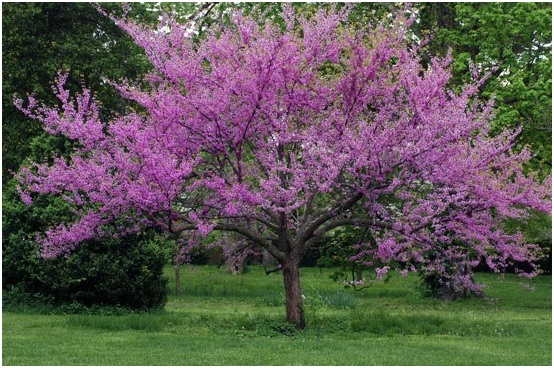 It is also found in open woodlands, groves, woodland peripheries, limestone dells and along rock-strewn streams and bluffs throughout Missouri (Steyermark).When a state bodies select a symbol for the state it should be represent extra ordinary design, quality, availability, expression, and usefulness, cultural, traditional and religious back ground, which go back thousands of years or its popularities. On basis of the facts that stated above, the state General Assembly of Oklahoma designated the Eastern redbud as the official state tree of Oklahoma in 1937.

Common name:  Redbud or Eastern Redbud.
Genus:  Cercis
Species:  Cercis Canadensis,
Found in:  native to eastern North America from southern Ontario, Canada south to northern Florida but which can thrive as far west as California.
Flower:  The flower of Eastern redbud trees are very showy, light to dark pink in color, 1/2 inch long, appearing in clusters of four to eight flowers in March to May, before the leaves or with the leaves. It is mostly thin and papery, fewer hairy on the underneath.
Bark:  The bark of the eastern redbud trees is mostly smooth, later scaly with crests somewhat apparent and red brown in color. May have some maroon patches marked. The branchlets are lustrous brown at beginning and turn to darker later.
Leaf:  The leaves of the Eastern redbud trees are arranged in rotate, plain, heart-shaped or broadly ovate shape with an entire margin, three to five inches long. Having five to seven-nerve, chordate or abbreviate at the base. It generates the bud folded along the line of the midrib, which is orangey green and turn to dark green above, paler beneath, become smoother when they are full grown.
Fruits:  The fruits of Eastern redbud are flattened, dry, brown, pea-like pods, 2 to 4 inches long, which are legume, somewhat stipitate, asymmetrically oblong, acute at apiece end. It is fully grown in midsummer with rose color and having ten to twelve seeds of which are chestnut brown and ¼” inch long.
Purpose:  ornamental.
Symbolism: Ashamed, shame

The Oklahoma’s state tree the Eastern redbud can easily grows in normal, medium moisture and well-drained soils with full sun to partial shade. Partial shade is very much helpful in hot summer climates. Generally the redbud tree is more numerous on south facing slopes with more sunlight. It prefers reasonably fertile soils with standard and constant moisture. Always have to avoid wet or poorly drained soils. It is a large deciduous shrub or small flowering tree, habitually multi-trunked understory tree with a rounded crown that characteristically matures to 20-30’ tall with a somewhat largely spread. The Eastern Redbud tree has no commercial value as lumber because of its size.

It is naturally small in size and irregular shape. It is mostly used as ornamenting the gardens, roads side and park etc. The Native Americans have been used most of the part of redbud as medicinal herb. They boiled the bark to make tea and used as the remedy of whooping cough. Dysentery was also treated by using the caustic from the bark. The roots and inner bark were utilized for fevers, congestion, and vomiting.