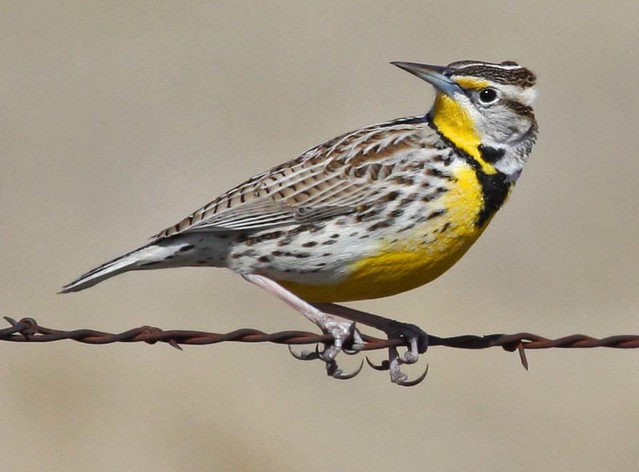 The National Bird Of Nebraska Western Meadowlark is probably the most common prairie bird visitors will observe along with the loops in the Great Plains Trail. The bright yellow breast with the “V” is very distinctive, plus the male enjoys perching on fence posts which makes this bird quite visible.  Surprisingly, meadowlarks are members of the Blackbird Family. The male State Bird Of Nebraska Western Meadowlark will have up to 3 females in his territory of about 7 acres during the summer breeding season.  During the winter, State Bird Of Nebraska meadowlarks eats seeds off the ground. During the rest of the year, they pick off insects and spiders from plants as they walk slowly through the prairie.

The Nebraska State Bird western meadowlark’s song is a flute-like warbling or gurgling that goes down the musical scale and can be quite complex and abrupt. Males may have up to three mates in their territory that will nest on the ground in a domed nest of dried grasses with a side entrance. They may have two clutches per year. State Bird Meadowlarks forage on the ground in open fields and meadows, using their bills to probe beneath the soil for food. In winter, meadowlarks often feed in flocks.

Nesting Period: Late May to August