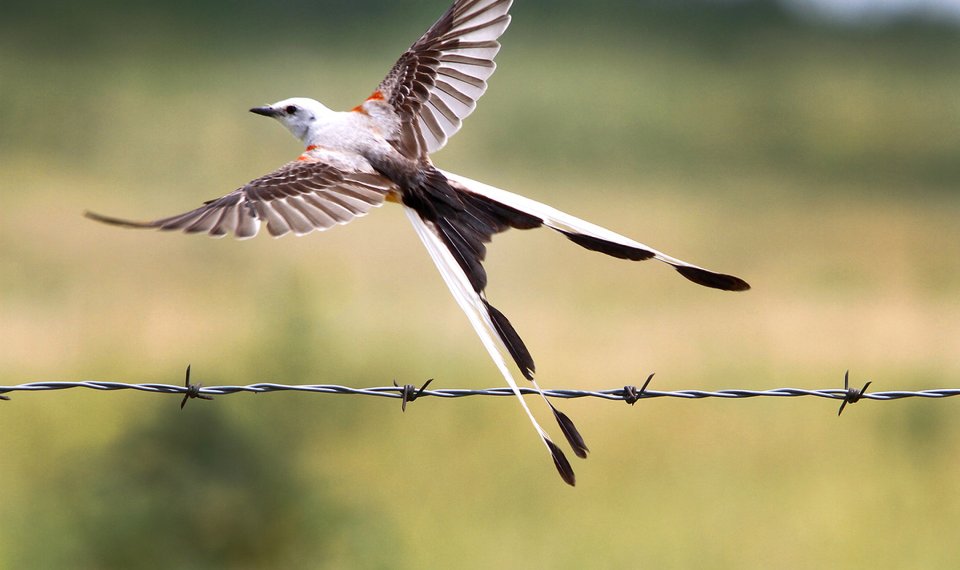 Scissor-tailed Flycatcher Is The Official State Bird Of Oklahoma. Oklahoma Adopted the elegant scissor-tailed flycatcher (Muscivora forficata) as the official Oklahoma State Bird in 1951. The scissor-tailed flycatcher is descriptively named. During the flight, which can be quite acrobatic in hunting and in courtship, the bird spreads two exceptionally long tail feathers like a pair of scissors. The National Bird Of Oklahoma scissor-tail is a common sight on fences, tree branches, and telephone wires in rural farm country throughout the south-central United States.

The male bird’s back and neck are whitish-gray, its breast is white, and its wings are black with a red patch on the shoulders. The Females State Bird Of Oklahoma has a shorter tail and is more brownish-yellow in color. Flycatchers consume crickets, spiders, and grasshoppers. Nesting usually takes place in an isolated tree 7-30 feet (2-8 m) above the ground. Oklahoma State Bird Scissor-tails are noisy, and their calls are variable, including sharp “bik” or “kew” sounds, a crow-like “ka-kee, ka-kee,” and a series of “ka-loop” sounds. The flycatcher’s nest, typically in an isolated tree, is made of sticks and lined with soft materials. National Bird Of Oklahoma Scissor-tailed flycatchers captures most of their prey by hovering and diving to snatch insects off vegetation or by catching flying insects in midair. They are aggressive, known to chase off much larger birds.

In spring the male performs a striking courtship display, flying in a vertical zigzag pattern while opening and closing his tail feathers and twittering. State Bird Of Oklahoma Breeds in open prairies with sparse trees and shrubs, along tree-lined roads, in small towns, and in farming areas. Winters in grasslands and at the edge of tropical forests. The Central United States to Central America. Breeds from southeastern Colorado and southern Nebraska to southeastern New Mexico, southeastern Texas, western Louisiana, and northeastern Mexico. The winter range is from southern Mexico and Central America to South Florida.