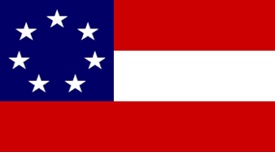 A national/state flag is the entity of a country or state. So each and every country or states have their own flag. Alabama entered the Union in 1819, and then they have not their own flag. They adopted their own state flag after separated from the Union in 1861. The distressed Alabama citizens decided to withdraw from the Union of the United States at the Secession Convention of January 11, 1861and they adopted their own flag, which have been designed by a group of Montgomery women that called “Secession Convention Flag” that became the first official flag of Alabama. Because Alabama had left the union, the flag was often referred to as the “Republic of Alabama flag.”

On January 11, 1861, the Secession Convention passed a resolution designating a flag designed by a group of Montgomery women as the official flag of the convention. This flag has often been referred to as the Republic of Alabama Flag. One side of the flag displayed “Independent Now and Forever” and the Goddess of Liberty holding in her right hand an unsheathed sword while a small flag with one star in her left hand. On the reverse side of the flag was a cotton plant with a coiled rattlesnake. Below the cotton plant, there are the Latin words: “Noli Me Tangere,” which means “Touch Me Not”.

On February 16, 1895, the Alabama Legislature authorized the “crimson cross of St. Andrew on a field of white” as its official State flag of Alabama after 76 years being admitted to the Union, in the Acts of Alabama.  The Representative, John W.A. Sanford junior, introduced legislation on which flag should bear the state’s entity. The current flag of the state of Alabama was adopted by Act 383 of the Alabama state legislature on February 16, 1895

“The flag of the State of Alabama shall be a crimson cross of St. Andrew on a

field of white. The bars forming the cross shall be not less than six inches broad,

and must extend diagonally across the flag from side to side.”

The Cross of St. Andrew referred to in the law is a diagonal cross, known in vexillology as a saltire. For the reason that the bars must be at least six inches wide. 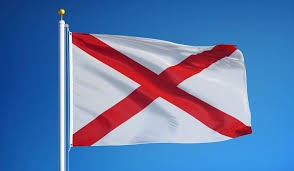