What is the State Flower of Alaska ? 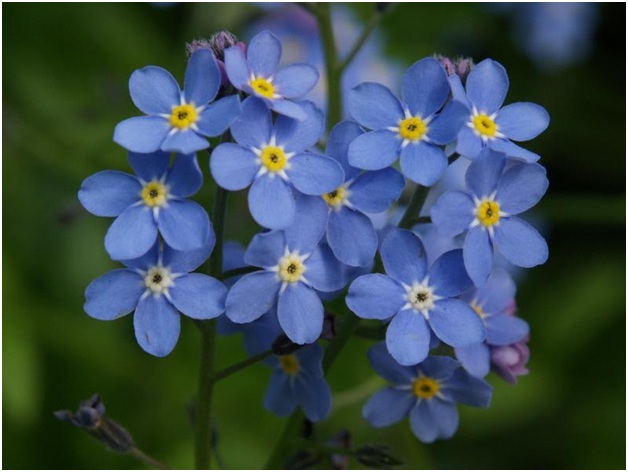 Alpine Forget-me-not is the State flower of Alaska. Myosotis alpestris is the scientific name of Alpine Forget-me-not and it is commonly known as Forget-me-not in Alaska. Alaska named the Forget-me-not as its official flower before it was even declared a state. The flower was first chosen by the “Grand Igloo,” which is an organization formed by pioneers who arrived in Alaska before 1900. They named the flower in their constitution in 1907, and it quickly was adopted by the broader population as a symbol of the Alaskan region. In 1912, the U.S. Congress passed the second Organic Act, which authorized Alaska to create a territorial government with limited powers.

Just five years later in 1917 a bill was introduced that proposed the Forget-me-not be declared the official floral emblem of Alaska. What better way for people to remember a state that most people automatically dismiss than to have a state flower that is called the Forget Me Not? The pioneers who first adopted this flower knew that they must chose something that stuck in the minds of those that came to the area and one that was going to catch people’s attention. The state flower of Alaska- the vibrant sky-blue flower surely does that.

The Forget-me-not, Alaska’s official state flower symbol, is a small clump-forming perennial or herbaceous that grows 5 to 12 inches high in alpine meadows. The flowers have five connected salviform petals in a sky blue color, which are a quarter to a third of an inch wide. The five sky blue colored petals look very vivid against the green grass. They have a white inner ring and a yellow center. Stems of the flowers are around six to twelve inches high and contain multiple flowers on the stem, each flower having a stem that sprouts off of the main stem.

The stem and the flower are covered in fine hair like fibers. The best time to spot alpine forget-me-nots is midsummer, from late June to late July. The flowers are very fragrant in the evening and night time, but they usually give off little or no scent in the daytime. The meaning of the Forget Me Not flower is one that most people speak of when talking about being faithful. Those women in past times would wear these flowers as a way to show that they were faithful to their lovers and that their lover was always on their mind.

Other people use the flower as a remembrance of certain event of death of a loved one, though this is something that has faded with the new ways of thinking, but in parts of Newfoundland still is used. The Alaska state flower of the Forget Me Not is one that is fitting to a state that wants people to remember it for its beauty and wild nature. And it is one of those flowers that most people easily recognize and can easily associate with Alaska. A legend states that in Germany a knight was walking with his lady along the river. The knight was picking these flowers for the lady when he slipped and fell into the river, before the river dragged him under; he tossed the bouquet to her and shouted in German, “Forget me not!”

The state flower of Alaska, USA is undoubtedly an eye-catching beauty that grows in plenty throughout the state. Because of its stunning gorgeousness and the frequent occurrence in nature in Alaska, it was a natural fit for the state to choose.