What is the State Mammal of United States of America? 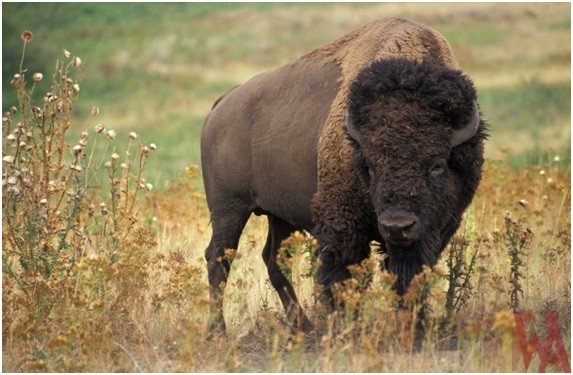 The “American buffalo”, or American Bison, According to the U.S. Department of the Interior, the National Bison Legacy Act into law, which duly signed on May 9, 2016, by President Barack Obama the American bison, became the official national mammal of United States of America.

United States of America’s state Mammal, bison, is a giant Mammal that weighs from 800 to 2,000 pounds and stands nearly six feet high at the shoulder. A big head, high hump on the shoulders and dark brown shaggy hair characterize the buffalo. Bison are part of the family Bovidae. It is the family to which cattle and goats belong. They are not in the same family that Asian and African buffalo are. However, because they resembled these old world Mammals, the early explorers called them by that name. The hump, along with a broad, massive head, short, thick neck and small hindquarters give the Mammal its rugged appearance.

United States of America’s state Mammal, Bison are year-round grazers. They feed mostly on grasses, but when food is scarce, they will eat vegetation such as sagebrush. On the average, bison ingest 1.6% of their body mass per day of dry plants. Bison require water every day as well. The female bison gives birth to one calf at a time after nine months period gestation. Occasionally it may twin. Births usually occur between March and May. Bison babies are called calves, which are born big in size. Its weight is in between 30 to 70 lbs. at birth. Female bison or cow bison take care of her calf.

Calves are weaned 7 – 13 months which naturally become sexually matured within 2-3 years. The American Bison, the official national mammal of the United States of America, which was the vital food sources of Plains Indian Tribes. They used bison for food, clothing, and other cultural items through used the entire body of the bison.