What is the National Animal of Canada? 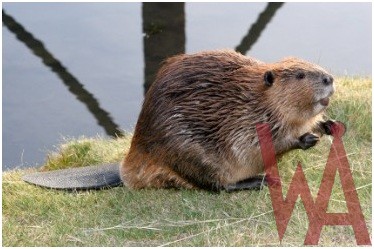 Canada’s national animal, Beavers have a waterproof, rich, glossy, reddish brown or blackish brown coat. The under pelt are finer than the outer, protective, guard-hairs. The ears are short, round, and dark brown in coloration. Beaver’s back legs are longer than the front, which making the back end to be higher than the front end at the time of walking. The skulls and teeth of the Beaver are excessively large, which is vital for cutting hard woods like maple and oak. Particularly the upper incisors, it is bright orange in color, which 20-25 mm long and is 5 mm wide.

These teeth grow throughout the life and have necessity to survival. Dam-building activities of beaver are significant to natural water flow and erosion control and for this reason it is also been called ‘‘nature’s engineer.” National animal of Canada, Beavers mate during the winter, from January to March. American beavers give births to one to four kits that weigh around 9 to 21 ounces (250 to 600 g) after a gestation period of around 105 to 107 days. May be the Beaver’s bodies are made for the water. Its rudder-like tail and webbed feel is propelling them through the water at 5 mph (8 kph).

According to National Geographic the Beavers can stay under water for around 15 minutes at a time. The tails aren’t used only for swimming but also use to startle predators as they dive out of harm’s way by slapping the water with them. Canada’s national animal, Beaver has economical value. As a fur animal the value of the beaver added significant role to the journeying and expansion of western civilization in North America. Now, the beavers are an imperative economic and entertaining resource due to the value of their fur and to modifying habitat.