River Map of Luxembourg has many rivers and All of them are drained into the North Sea, most via the Moselle River, except in the extreme south-west of the country, which is drained by the Chiers. Some rivers do not flow through Luxembourg themselves, but they are mentioned for having tributaries from Luxembourg.

River Map of Luxembourg showing the lakes and running routes of the rivers in Luxembourg. Luxembourg’s major rivers are the Moselle, the Sûre, and the Our, which together form its border with Germany.

The most important lake is the Upper Sûre Lake, situated on the course of the Sûre River as it winds across the upper portion of the country. Esch-sur-Sûre is located at its eastern end, which is the site of both a nature reserve and a hydroelectric dam. 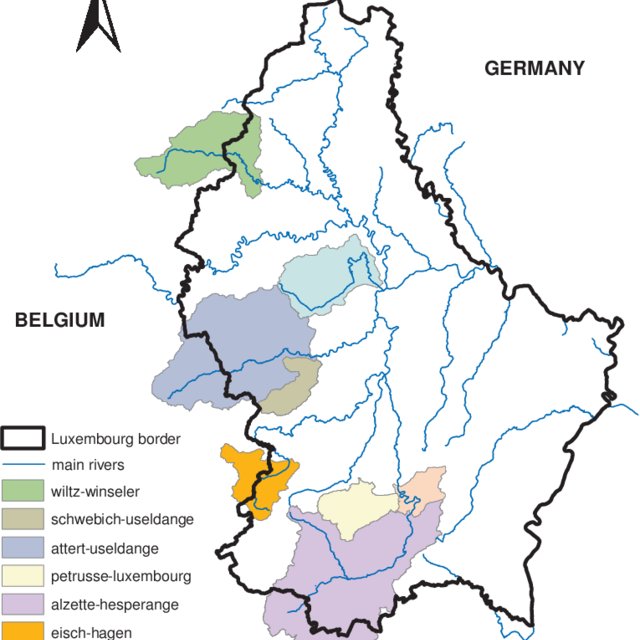 The Moselle River is one of the largest rivers of Luxembourg. Its trajectory along the Luxembourg border runs 39 km in length to form a natural boundary with Germany. The Moselle lends its name to one of the most beautiful valleys of Luxembourg, famous for its wineries, charming hotels, and medieval towns. "D'Musel," as it is affectionately known by its inhabitants, is also a region of traditions, such as the cavalcade of Remich and the grape and wine festival in Grevenmacher.

The Saure River is another major river which rises in Belgium, flows eastward across Luxembourg in a meandering course for 172 kilometers (107 miles), gathering tributaries from both the northern and southern parts of the country before reaching the German border and then flowing southward into the Moselle.

The Alzette is a river with a length of 73 kilometers (45 mi) in France and Luxembourg. It is a right tributary of the Sauer. It rises in Thil near the town Villerupt in the Meurthe-et-Moselle département, France. It crosses the border with Luxembourg after a few kilometers. At Lameschmillen (near Bergem) it is joined by the Mess. It flows through the Luxembourgish towns Esch-Sur-Alzette, Luxembourg City and Mersch, and empties into the Sauer near Ettelbruck.