A Political Map is a Map that shows the political boundaries of a particular Country. It shows the borders of things like countries and states, along with cities and capitals. We are going to discuss the Political Map of India and the Cities of India here. The administrative division has made it easy for the rulers to continue a smooth governmental service everywhere.

India is officially called the Republic of India. It is a country in South Asia that occupies the best part of the Indian subcontinent. India comprises a total of 28 states along with 8 union territories. India is the second most populated country in the world and the world’s largest democracy.

In the Political Map of India, The country’s coastline measures 7,517 kilometers in length. From this length, 5,423 kilometers belong to peninsular India and 2,094 kilometers belong to Andaman, Nicobar, and Lakshadweep island chains. The distance from the country’s northern border to its southern coastline is 2,930 km (1,820 mi). From the west coast of Gujarat to the border with Bangladesh in the east 2,040 km (1,267 mi). 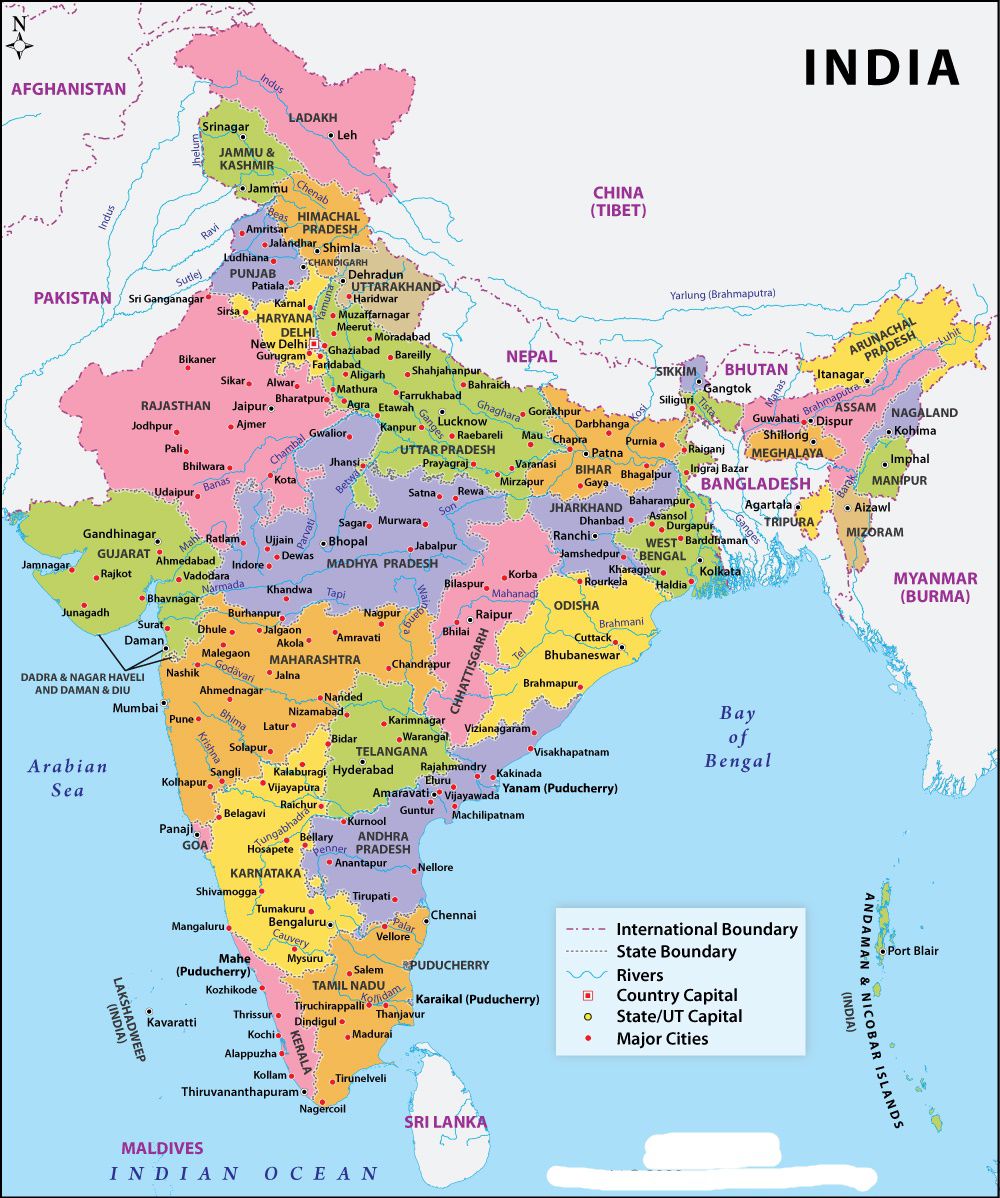 The Country shares borders with Bangladesh, Bhutan, Myanmar, China, Nepal, and Pakistan, and it shares maritime borders with Thailand, Sri Lanka, Indonesia, and the Maldives. India also shares a 106 kilometers long border with Afghanistan, but the area is disputed and administered by Pakistan. The maritime borders of India are the maritime boundary recognized by the United Nations Convention on the Law of the Sea entails boundaries of territorial waters, contiguous zones, and exclusive economic zones. India, with its claim of a 12-nautical-mile (22 km; 14 mi) territorial maritime zone and 200-nautical-mile (370 km; 230 mi) exclusive economic zone, has a more than 7,000-kilometre (4,300 mi) maritime border shared with seven nations.

There are mainly four metropolitan cities in India naming Mumbai, Delhi, Kolkata, and Chennai. Delhi is also the capital of India and political capital too. Maharashtra's prominent city Mumbai is the economical and entertainment capital of India. Kolkata is one of the largest cities of west India and Chennai one of the largest cities of South India. Tier-II cities are more like metropolitan but are not officially designated as metropolitans like Bengaluru, Lucknow, Bhopal, etc. Some of the tier 2 cities are known for their beautiful landscape too.