41 Amazing Interesting Facts About India | Things To Do In India 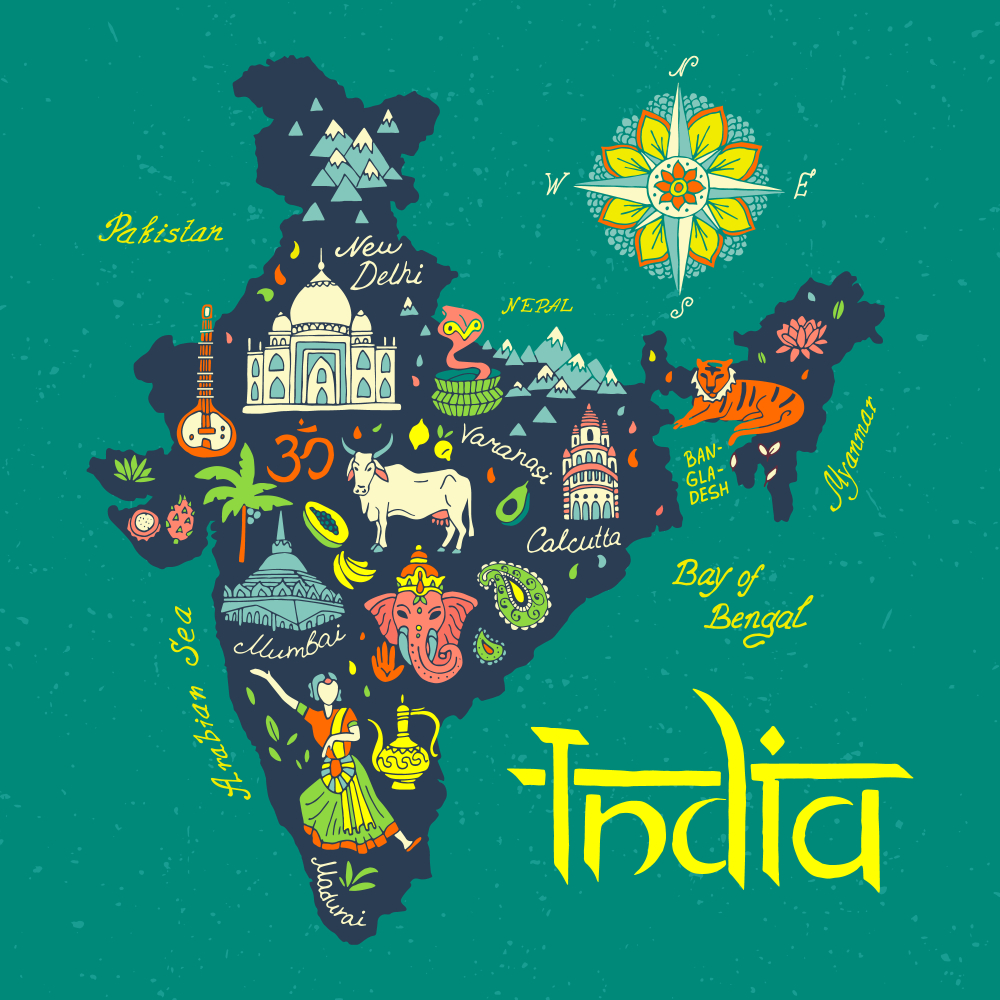 India, officially the Republic of India, is the 2nd most populous country in the world, after China. India has a total area of 3,287,263 sq km. It is a country in South Asia and has 28 states. The country’s capital state is New Delhi.

No matter how much you learn about India, you can’t know enough. The country’s diversity has tons of incredible but true facts waiting to be revealed.

1. 5000 years old, Varanasi is One of The Oldest Inhabited Places in the World. According to Hindu Mythology, Lord Shiva found this city 5000 years ago.

2. India has the largest postal system in the world with more than 150,000 post offices, which is thrice the size of that of China.

3. India is also one of the largest democracies in the world.

4. India has more than 300,000 active mosques. This outnumbers any other country in the world, even the Muslim countries.

6. India is the world’s largest milk producer, with 16 percent of global production, followed by the United States of America, China, Pakistan, and Brazil.

9. Mahatma Gandhi is known as The Father of the Nation. His full name was Mohandas Karamchand Gandhi. He died in 1948 and was responsible for the freedom of India along with other freedom fighters.

10. ‘Zero’ in the number system was invented by a mathematician from India. His name was Aryabhatta.

11. Snakes and ladders – the game, was invented in India in the 13th century by a poet saint Gyandev. The ladders represent the virtues while the snakes indicate vices. The game was designed on the basis of the concept that good deeds take you to heaven while bad deeds take you to hell.

12. India has the world’s largest attended events. The biggest of which is ‘Kumbha Mela’ of 2001 – attended by 60 million people and was seen from space.

13. Indian railway employs more than a million people, making it the largest employers in the world. Indian Railways has the world’s 4th longest rail network.

14. The number of people traveling in Indian Railways is roughly 25 million per day which is like shifting the entire population of Australia.

15. Holding a Guinness record for the highest average annual rainfall, this town in Meghalaya gets about 11,873 millimeters of rain owing to its proximity to the Bay of Bengal.

16. From the moment an Indian is born, he has two mothers. One, his birth mother, and two, Gaumata. Cows are believed to be holy in Hinduism, and the Constitution has a set of rules in place that prevents the sale and slaughter of cows.

17. A small village in the Jaunpur district of Uttar Pradesh, Madhopatti has created history by producing the most number of IAS officers. With about 75 households, it has given 47 officers to Indian administration.

18. India is a cricket-loving nation. It’s only natural for it to also feature the highest cricket ground in the world recorded by the Guinness Book. It is situated at a level of 2,144 meters above sea level in Chail, Himachal Pradesh.

19. In 1963, ISRO launched its first-ever rocket from a church in Thumba, on the outskirts of modern-day Trivandrum. The said rocket was transported on a bicycle. The launching pad later came to be known as Vikram Sarabhai Space Center (VSSC).

20. About 35 meters taller than the Eiffel Tower, the arch-shaped Chenab bridge in Jammu and Kashmir is the world’s tallest rail bridge. It stands at the height of 1,178 feet over the river Chenab.

21. White tigers are only found among Indian tigers. White tigers a type of Bengal tiger created through a variant in pigmentation. They often grow into larger animals than their orange-colored cousins.

22. In Indian law, only men can be punished for adultery. In recent years, lawmakers have been considering scrapping the law but no final decision has been made.

23. Half of the world’s outsourced IT services come from India. Industries including banking, healthcare, financial services, and accounting are outsourcing in ever greater numbers.

26. Eight percent of India’s population is Hindu, 13 percent are Muslim and millions more are Sikh, Jain, or Christian.

27. The Baily Bridge is the highest bridge in the world. It is located in the Ladakh valley between the Dras and Suru rivers in the Himalayan mountains. It was built by the Indian Army in August 1982.

29. The World’s First Granite Temple is the Brihadeswara Temple at Tanjavur, Tamil Nadu. The shikhara of the temple is made from a single 80-tonne piece of granite. This magnificent temple was built in just five years, (between 1004 AD and 1009 AD) during the reign of Rajaraja Chola.

30. Breathing the air in Mumbai, India, for just one day is equivalent to smoking 100 cigarettes.

31. Every Indian currency note has 15 languages on the reverse side and two on the front, which is English and Hindi.

32. India has the largest slave population in the modern world with over 18 million slaves.

33. While Beijing’s pollution problem is more famous, the world’s most polluted city is New Delhi.

35. After every 200 km in India, you will encounter a new language (or at least a dialect) Which is again one of the most unique things in India.

37. India’s national tree is the fig or banyan. This tree is a symbol of immortality and found in many mythical stories.

38. India is home to the Himalaya mountains, which comes from the Sanskrit words “hima,” meaning “snow” and “alaya,” meaning “abode.” These sacred mountains are peppered with ancient monasteries.

39. According to the Guinness Book of World Records, India ranks third behind the USA and the UK in the number of records claimed each year.

40. The main food staples in India are wheat, rice, and lentils. Most meals are vegetarian, and most dishes are eaten without the use of cutlery.