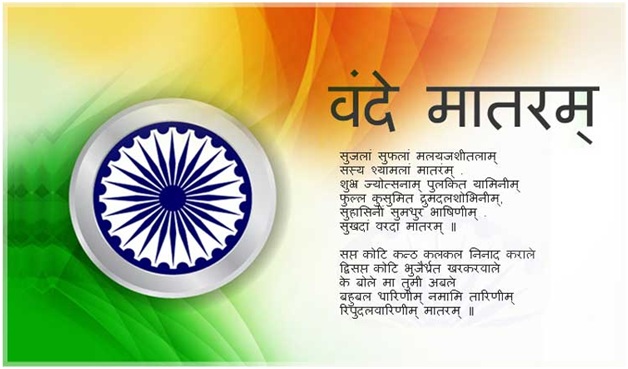 The Song ‘Vande Mataram’ is the National Song of India. It is composed in Sanskrit by Bankimchandra Chatterji. The song was a source of inspiration to the people in their struggle for freedom.  It has an equal status with Jana-Gana-mana.

On January 24, 1950, the President, Dr. Rajendra Prasad came up with a statement in the Constituent Assembly, “the song Vande Mataram, which has played a historic part in the struggle for Indian freedom, shall be honored equally with Jana Gana Mana and shall have equal status with it.” The first political occasion when it was sung was the 1896 session of the Indian National Congress. The song was a part of Bankimchandra’s most famous novel Anand Math (1882).

I bow to thee, Mother,

cool with the winds of the south,

dark with the crops of the harvests,

Her nights rejoicing in the glory of the moonlight,

her lands clothed beautifully with her trees in flowering bloom,

sweet of laughter, sweet of speech,